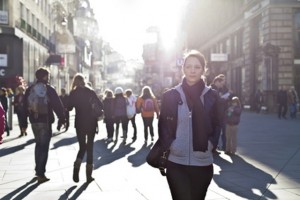 Young people are largely responsible for driving a resurgence in city-centre living, according to Urban demographics: Where people live and work in England and Wales, a new report from the think tank Centre for Cities. This shows that the population of large city centres in England and Wales almost doubled between 2001 and 2011, an increase which was driven mainly by residents aged 20–29, who tripled in number, and now make up almost half (49%) of the total.

This report is the first publication from a major two-part study that the Centre for Cities is undertaking, which should produce its final report in November 2015, using polling data and four case-study cities to investigate these patterns of urbanisation. Given the economic barriers that this generation faces to saving and achieving home-ownership, it is interesting to wonder to what extent these trends are explained by choice.

Young men and women about town?

These trends appears to herald a reversal in the long-term decline of city centres, many of which were battling throughout the 1980s and 1990s against powerful currents of deindustrialisation and suburbanisation.

The report suggests a number of positive explanations for why growing numbers of young people could be choosing to live in cities. The benefit of being closer to where there are more highly-skilled jobs is likely to be one important factor, as many such industries now seem to be clustering in city centres. The report also suggests that the growth of higher education has been significant, particularly in the North and the Midlands, where clusters of new-build student accommodation have been developed in urban centres. Lifestyle factors, such as close proximity to shopping and nightlife, have also made city centres more attractive.

… or prisoners of geography?

The reasons suggested above could be described as the optimistic scenario – one that argues that young people are largely choosing to live in city centres because it improves their lives in various ways. However, there is also a pessimistic scenario under which young people could be having to compromise their quality of life due to economic factors which are beyond their control.

The Centre for Cities report highlights some issues about this trend which should be of concern to policy-makers: the share of city-centre households being classed as “over-crowded” rose by 69% between 2001 and 2011, and it notes that many young people are having to pay extremely high prices to be able to live in these areas.

The report notes that the traditional life-cycle pattern of urbanisation is clearly being seen in many cities, whereby people start moving out to the suburbs once they get older and/or form couples and have children. By contrast, the profile of young city-centre dwellers is overwhelmingly single – barely a fifth (22%) are married or in civil partnerships.

This invites the obvious question of whether these patterns will still continue as today’s young urbanites get older, given that many of them are having to spend so much on rent that they cannot afford the deposit required to get on the property ladder. Many people expect the future of English housing will involve an ever-growing proportion of renters, so how will this influence patterns of family formation and urbanisation? Are we looking at a future in which large numbers of people start raising children and settling permanently in the middles of cities, which would have considerable impacts for public services?

Hopefully, the second report in this very interesting project will help shed some light on these questions when it arrives later on in 2015.