In the second in a series of related blogs, IF supporter Tim Lund envisages a consumers’ guide to landlords – difficult to assemble for the reasons cited, but a much-needed tool for all those (and especially the young) in the rental sector 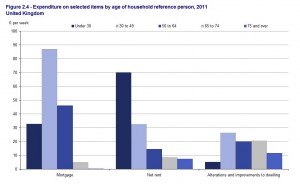 There is a notable absence in the list of services offered by the Consumers’ Association on the Which? website. Most of life’s big milestones are covered: Which? University, Which? Mortgage Advisers, Which? Birth Choice, Which? Elderly Care and Which? Wills. But where is the advice for the widening age cohort of 20- and 30-somethings, for whom Which? Landlord is a more immediate and pressing concern?

As figures from the Office for National Statistics show (click on the graph to enlarge it; source: “Living Costs and Food Survey”, ONS), it is hard to imagine a sector of the economy of comparable size where the interests of consumers are so poorly represented.

Some obstacles − but superable

In fairness to the Consumers’ Association, there are some understandable reasons why they should not cover landlords.

(1) The market is very fragmented, with little in the way of branding – so, few suppliers’ offers would be available to more than a handful of consumers. This is undeniable, but within the social housing sector there are large providers, who compete in “beauty contests” when stock transfers are done from Local Authorities. In the private rented sector, some landlords are much bigger than others, and any which intend to be in it for the long run will aim to build up a brand and associated reputation. Reputation and brands may also be relevant to professional letting agents, rather than their clients, when these are small buy-to-let investors.

(2) The market is politicised, in the sense that the virtues of social housing versus private renting are felt strongly by many on the Left, while recent reports are, unsurprisingly, seen as politically motivated from the Right (for example “Why housing associations are the true villains of the property crisis”by Ross Clark in the Spectator, 25 July 2015). Again, undeniable, but most people in the 20+ age bracket are not interested in these polemics, and just want a decent place to live. It should be possible to look objectively at factors such as levels of rent, transparency of charging, efficiency and cost of maintenance, dealing with nuisances, and other factors which might be identified by a study of what actually matters to tenants.

(3) The consumers in this market are not the same as the typical Which? Magazine subscriber. Of course, but this also makes it an area where Which? should be able to grow, and win customers for the long run.

If not Which?, then there should be an opportunity for a new market entrant, almost certainly on-line only, to provide the service needed by this important consumer sector.

Whoever it is to be, at the Intergenerational Foundation, we’d like to be in touch!