On 31 August 2001 in Lima, Peru, Christian Pardo Reyes started a campaign – operating through events and publications – to introduce a quota system to reflect the need to involve youth at all levels of government power. His organisation became the Internacional Juvenil. To achieve its goals, it established strong relationships with other youth organisations, state agencies and influential political leaders. Here Christian Pardo Reyes tells the story 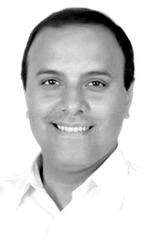 Initially the talk was about the importance of adopting a Youth Quota Act to somehow “balance” the situation in the political activities of young people compared to adults. On 5 September 2001 the proposal was was put before the Congress of the Republic of Peru that the lists of candidates competing for public office at all levels of government (national, subnational and municipal) should have a minimum of 10% of people under 29 years old.

The proposal continued its course in the Congress of Peru, but it evolved over time and became a public policy proposal that sought to strengthen the democratic system with the active participation of young people, regarding them as an important part of the full exercise of power, leading them to the public sphere, and achieving increasingly greater involvement in the destiny of our people. In Spanish, this became known as the Diezmo Juvenil, which is translated as the “Youth Tithe”.

The origin of this expression is that historically the “Tithe” was a tax of 10% on the value of certain goods, especially the one paid to the king; however, in this case the meaning does not relate to a tax, but rather to the political sphere, with “Youth” referring to the new political generations.

A “Youth Tithe” Act has actually been adopted in Peru and promoted in other countries. The Internacional Juvenil (IJ) was founded on 12 January 2002 in Guayaquil, Ecuador. This youth organisation brings together leaders from various other countries and it is forging a new generation of leaders – transformers capable of playing a leading role in the social, economic and political development of our nations and of designing a new world order with freedom, justice and solidarity. The Internacional Juvenil organises their networking and it has focal points in various countries. It conducts youth advocacy and provides training for youth. It also represents youth in different forums, both regional and global, and has representatives in various countries. Immediately after its foundation it established its headquarters in Lima, Peru.

The “Youth Tithe” is now a doctrine that seeks to give real power to the youth, promoting a culture of intergenerational dialogue (between adults and young people) with the implementation of a public policy on youth empowerment which seeks to ensure effective participation of youth in all levels of government, in government decision-making spaces and public administration, and it encourages the active participation of young people in government and social audit.

The “Youth Tithe” is gaining strength in opposition to the traditional perception that experience and ability are associated only with older people and not the young, and is an alternative to the gerontocratic political and administrative system that dominates today. Because of the latter, age discrimination occurs, in addition to other forms of discrimination against the young, to prevent them from exercising their rights, especially political rights. It is imperative that the gerontocratic system collapses and opens the way for a political system in which young and old can have equal opportunities.

Real results in Peru and Ecuador

On July 2006 the “Youth Tithe” was included in the National Youth Plan 2006–2011 of Peru, at the end of the government of Alejandro Toledo. At the beginning of the government of Alan Garcia in August 2006 it was possible to implement it with Act No. 28869, which promotes youth participation in municipal elections and stipulates that there must be a minimum of 20% young candidates on lists for municipal councillors. Act No. 29,470 was approved in December 2009, establishing the same minimum rate of young people for candidates in the lists of regional councillors (subnational). These Acts are unique in their type, and when they came into force it became possible to increase by more than 100% the number of young elected officials in the areas of government decision-making at the municipal and regional level in Peru.

It should also be mentioned that in Ecuador’s Executive Decree No. 002 of 15 January 2007, approved by President Rafael Correa, it was decided that half of the lists of candidates participating in the elections for the Constituent Assembly in Ecuador should be reserved for persons between 25 and 45 years. President Correa then issued Executive Decree No. 054, dated 23 January 2007, which reduced the minimum age of participation to 20 years. Next the National Congress of Ecuador, through Resolution R-28-038 of 13 February 2007, eliminated even this provision, although it remained 20 years old (it was 25 years before) for an Assembly candidate. This was a precedent for the inclusion of a chapter dedicated to youth in Ecuador’s new Constitution.

For these initiatives, the Internacional Juvenil  – as the promoting organisation – won the World Bank award for “Best Practices of Youth in the Andean Region and Central America – Bolivia, Honduras, Nicaragua and Peru”. The award was presented in Lima in June 2009. It similarly triumphed in the contest for “Best Practices in Youth Policies and Programmes in Latin America and the Caribbean” coordinated by the United Nations Educational, Scientific and Cultural Organization (UNESCO) and the Youth Programme of the Inter-American Development Bank (IDB), receiving the award in Puerto Vallarta, Mexico, in November 2009. These successes were recognised and acclaimed by the Congress of the Republic of Peru.

World figures such as Jorge Sampaio (former President of Portugal and appointed by Ban Ki-moon (Secretary-General of the United Nations) as UN High Representative for the Alliance of Civilizations) have saluted this campaign for intergenerational and intercultural understanding.

Work continues in other countries of the world, such as Argentina, Chile, Colombia, Dominican Republic, El Salvador, Mexico and Spain, where a “Youth Tithe” is being promoted.