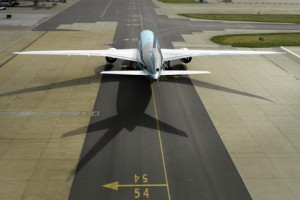 The Airports Commission, which was appointed by Prime Minister David Cameron in 2012 to produce a recommendation for expanding Britain’s aviation capacity, has determined in favour of building a third runway at Heathrow. How likely is it to actually go ahead, and what could this recommendation mean for intergenerational justice?

The Airports Commission, which was chaired by the economist Sir Howard Davies, recommended the Heathrow option on the grounds that it would produce the biggest benefit to Britain’s economy relative to its cost compared with the other options which were also under consideration, principally building a second runway at Gatwick or lengthening one of Heathrow’s existing runways. The headline figures in the Commission’s Final Report claimed that building a third runway at Heathrow would add £147 billion to the UK economy and create 70,000 jobs by 2050.

So will it actually happen? At present this is still only a recommendation; in order for a third runway at Heathrow to be built it would need to overcome two sets of obstacles, one practical and the other political. The practical issues consist of all the normal headaches which accompany any major development: there will need to be another public consultation in order to satisfy the Arhus Convention, which gives virtually all interested parties a legal right to register their views on proposals affecting the environment; then there will be design issues and planning permission (although the scheme would probably be referred directly to the Secretary of State as it would have national significance), likely legal challenges and so on. Even if work began as quickly as possible the third runway probably wouldn’t open for at least another decade.

Then there are the political obstacles, which look even more formidable. In order to back the scheme, David Cameron would have to perform a U-turn on a campaign pledge he made in 2009 that Heathrow would never be expanded on his watch. Both the current Conservative Mayor of London, Boris Johnson, and one of the most likely Conservative candidates in the 2016 mayoral election, Zac Goldsmith, have publically opposed the scheme. As it happens, there are currently no fewer than five Conservative cabinet ministers who have West London constituencies which would be affected by the new runway, all of whom are likely to oppose it.

What this means is that it looks very unlikely that the recommendation from the Airports Commission will ever be accepted – as the BBC has pointed out, droves of commissions, inquiries, studies and consultations have been set up by successive governments to investigate airport expansion dating right back to the 1960s, and Britain still hasn’t built a new full-length runway at any of its major airports since the Second World War. There seems a strong likelihood that the report prepared by Sir Howard Davies will simply be the latest to gather dust alongside all the others.

Flying in the face of fairness

From the perspective of future generations, the inertia surrounding airport expansion might actually be good news. Coverage of the Airport Commission’s report appeared to be dominated by concern for the people who live close to Heathrow in the present, rather than looking at how the issue might affect the environment for future generations.

When it was set up, the Government handed the Airports Commission a narrow remit to choose between a limited number of options for future airport expansion; the question of whether Britain does actually really need more airport capacity was not up for debate. Many environmental groups claim that the arguments for the latter are unconvincing, especially given that Britain has signed up to stringent climate change reduction targets. In a 2012 research paper which was jointly produced with the Campaign for Better Transport, Flying in the Face of Fairness, IF argued that a more environmentally-friendly solution to the airport capacity challenge would be to look at demand management techniques, particularly phasing out the subsidies which are given to aviation that mean it is taxed much more lightly than driving. Reducing demand for flying would take some of the pressure off our existing airports, and also be better for the environment. The history of aviation policy, however, suggests that this issue is likely to remain permanently stalled before take off.