David Kingman explains the main findings from the OECD’s latest report on inequality, including the important intergenerational dimension of this problem 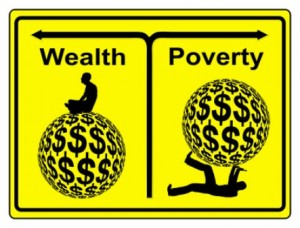 Levels of wealth inequality have reached record highs across most developed and middle-income countries, according to the latest report from the Organisation for Economic Cooperation and Development (OECD). Their publication In it together: why less inequality benefits all shows that the richest 10% of the population across the OECD countries as a whole now earn 9.6 times as much as the bottom 10%, compared to only 7 times as much during the 1980s.

As you can glean from its title, the main thrust of the OECD’s report is that rising inequality in developed countries ultimately has negative impacts for everyone, rich and poor alike, as it reduces the opportunities for those at the bottom of the heap and leads to greater demands on public services. In total, the OECD estimates that rising inequality in developed countries reduced aggregate economic growth by almost 5% between 1990 and 2010.

The findings of this report have particularly significant implications for young people. The biggest cause of rising inequality identified by the OECD is the growing precariousness of work, particularly for low-skilled and irregular workers. Across the OECD as a whole, the report estimates that between 1995 and 2013 over 50% of all jobs created in member states were either part-time, self-employed or based on temporary contracts – types of employment which the OECD argues are associated with much lower and more unstable earnings than jobs based on permanent contracts.

The report shows that young people have borne the brunt of these shifts in the nature of work: 40% of all under-30s in OECD countries are in non-permanent jobs, and this age group accounts for around half of all temporary workers.

Alongside the main report, the OECD also produced briefings which give an in-depth look at poverty and inequality in each of the individual member-states. The briefing for the UK paints an even more alarming picture of the gap between full-time, permanent workers and “non-standard” workers: the annual earnings of self-employed workers are 50% lower than for standard workers; people on temporary contracts earn 20% less than their permanent counterparts, and the poverty rate of households relying on these types of work is five-and-a-half times higher than that for households relying on standard work.

The overall conclusion to be drawn from this data is that an alarming divide is widening between older households which have the benefit of permanent, full-time jobs and a group of predominantly younger ones that have been compelled to enter into much more casual forms of employment, which are accompanied by lower wages and a much higher risk of poverty.

These trends are due to a combination of factors: the ageing of the wealthy baby-boomer cohort, the growth in social welfare schemes that protect pensioners, declining job opportunities and rising living costs for people in their 20s (especially housing), and the increase in childhood poverty. The result is that inequality – which this report makes it clear is one of the great challenges facing modern society – is increasingly taking on an intergenerational edge.