How to secure the ambitions of sustainability for the long term and for future generations in government and other institutions – that was the focus of a two-day conference in Cardiff this week. And, by a stroke of good fortune, it coincided with the official sealing by the Welsh Assembly of the “Well-being of Future Generations Act” – a triumphant moment, as Antony Mason reports. 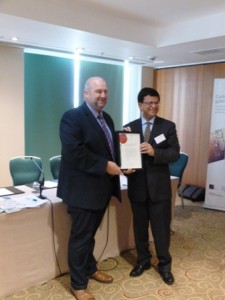 It was not planned this way, but after eight months of intense parliamentary wrangling, the official seal was set on Wales’s Well-being of Future Generations Act earlier today. Carl Sargeant, Minister for Natural Resources in the Welsh Government, was able to hotfoot it from the Senedd – the impressive glass-and-wood National Assembly building overlooking Cardiff Bay – to the equally eye-catching St David’s Hotel, to bring news to the 60 delegates at a Sustain Wales conference, where he was photographed with a copy of the sealed Act with Nikhil Seth, Director of the UN Division for Sustainable Development (pictured).

Wales is doing something special here, possibly creating a blueprint that other nations will want to follow – although the hard work of turning words into reality now lie before it. Essentially the Well-being of Future Generations Act establishes the role of the Commissioner for Future Generations, who – with the assistance of an Advisory Board – will be tasked with scrutinising all legislation and policy promulgated by the Welsh Assembly, through the lens of sustainability and the interests of future generations. In other words, the Welsh Assembly will be obliged to consider the long-term implications of everything it does.

The Commissioner will be supported by the authority of the Auditor General – so he or she will have some clout. In addition – and this is perhaps the real genius of this Act – he or she will have the authority of public support, gleaned, monitored and recorded by the parallel initiative called “The Wales We Want”. This is politics from the ground up, in the shared interests of long-term sustainability and future generations – and, by virtue of very successful outreach work, the Welsh people are, it seems, fully on board and ready to take their part.

The Conference was there to discuss the theoretical and practical issues around future-proofing sustainability programmes within government and institutions – issues that the current Welsh Commissioner for Sustainable Futures, Peter Davies, and his team have grappled with in the preparation of this legislation. “Essential Ingredients for a Sustainable Future: Why do we need independent institutions, and how should they work for the long term?” asked the conference title. It was organised by the Welsh Government and its Cynnal Cymru/Sustain Wales and The Wales We Want initiatives, the Oxford Martin Programme on Human Rights for Future Generations, and the World Future Council, and gathered delegates from politics and civil administration, NGOs, academia and think tanks (including the Intergenerational Foundation).

The central conundrum is how to establish a robust authority that can act as a watchdog for sustainability, and the long-term impact of policy, and hold a government to account. Such an authority has to have teeth if it is going to be effective, but governments are not generally given to establishing and funding bodies that are likely to bite the hand that feeds it.

Speakers from around the world showed how this could nonetheless be achieved, at various levels: local, regional, national. But what gives the commissioner (or ombudsman, or equivalent bodies charged with the task of scrutinising), their power of enforcement – their teeth?

In the case of Julie Gelfand, Commissioner of Environment and Sustainable Development in Canada, it is the fact that she is appointed by the Auditor General. Marcel Szabó, Ombudsman for Future Generations in Hungary, said that he ultimately could lean on the authority of the Constitutional Court. Public interest and support (as in Wales) is another source of authority – the power of publicly shaming governments that fail to match expectations or transgress.

The theoretical side of the issue, which underpins the practical, was presented concisely by Professor Simon Caney, Co-Director of the Oxford Martin Programme on Human Rights for Future Generations and Professor of Political Theory at Magdalen College, Oxford. What indeed are the essential ingredients for a sustainable future – or at least for the bodies charged with delivering that? He presented his list. Others, such as Robert Neil, Commissioner for Sustainability and the Environment in the Australian Capital Territory, and Jan van de Venis, Dutch lawyer and Director of Waterlex, presented theirs, but they broadly coincided – and it was clear just how many of these boxes the Welsh Commissioner for Future Generations can tick:

While the theory will continue to be refined, Wales is about to put it into practice. Watch this space.