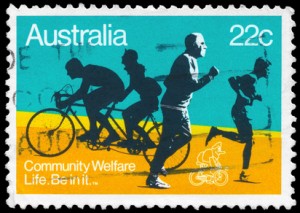 Under a law that was passed in 1998, Australia’s federal government is required to publish an official “Intergenerational Report” at least every five years. It examines the long-term outlook for economic growth, the workforce and public finances in Australia over the next 40 years, which can be used as a tool to help evaluate the long-term sustainability of current government policy.

The 2015 Intergenerational Report was released on 5 March. What did it say would be the biggest issues facing Australian policy-makers over the next four decades?

The most striking findings contained within the 2015 Intergenerational Report were the ones which related to the projected future profile of Australia’s population. Like several other developed countries – including the UK – Australia’s population is forecast to get both bigger and older over the years ahead.

Despite experiencing strong population growth over recent years, Australia’s population of 23 million means it still has relatively few people in relation to its vast land area. However, the number of Australians is forecast to continue growing significantly, almost doubling to reach a total of around 40 million by the year 2055.

However, like most developed countries Australia also has an ageing population, which means that the dependency ratio – the number of people of working age to support each person in retirement – is expected to fall from 2.1 to 1.7. A major driver of this process will be rising life expectancy: an Australian man who retires today at 65 can already expect to live for a further 19 years (one of the longest life expectancies in the world); but by 2055 this will have extended even further, to 26 years.

One of the implications of ageing which the 2015 Intergenerational Report particularly emphasises is the need for Australia’s economy to become more productive in order to cope with the larger number of dependents. In addition to its rising population, one of the reasons why Australia has enjoyed a long period of sustained economic growth is because economic productivity has kept on improving – the typical Australian worker now produces in one hour the same amount of output that they needed two hours to produce 40 years ago. However, this has a downside because it means that most of the easy gains have already been achieved: once you have automated something to make it twice as efficient you can’t generally do so again to get the same benefit.

Although the 2015 Intergenerational Report highlights the scale of the challenge posed by population ageing, it is worth emphasising that Australia’s politicians have been remarkably proactive (by European standards) over recent years about implementing measures designed to help mitigate some of these issues before they arise.

In 1992, Australia was one of the first developed countries to introduce compulsory private retirement saving for employees (dubbed “Superannuation” or the “super”), a prototype which influenced the design of pensions auto-enrolment in the UK. As a result of this, private pension saving is now widespread, so the Australian government has means-tested the state pension through gradually reducing the amount which people above the qualifying age are entitled to in relation to their private income.

Australia’s politicians have also been realistic about increasing the state pension age itself in relation to rising life expectancy. Under the previous administration it was increased from 65 to 67, and the current one has announced plans to raise it up to 70.

Launching the 2015 Intergenerational Report, Australia’s Treasurer, Joe Hockey, made it clear that he believes welfare policy should be designed to encourage older people to stay in work:

No mention of climate change?

The 2015 Intergenerational Report has also been criticised by environmental campaigners for being largely silent on the issue of climate change, which many people believe poses an especially severe threat to Australia because of the country’s extreme weather.

Christine Milne, a former leader of Australia’s Green Party, was particularly vocal in her criticism, emphasising the harm that the neglect of this issue could cause to future generations:

“Global warming has been ignored. All that’s here is a regurgitation of the government’s current and almost non-existent global warming policy. The report supposedly looks forward to 2055, but in 50 years people will look back at this report in the same way we now look at tobacco industry’s lies from the 1950s. You can’t have true intergenerational reporting without examining global warming and pollution from fossil fuels.”