In an edited extract from the paperback edition of his book All that is Solid (published February 2015), Danny Dorling explains why he thinks UK housing is in a state of chaos, with worse to come 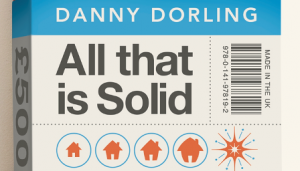 During 2013 housing prices in London rose by around £40,000 for an average flat or house that was sold as compared to the previous year. This brought the cost of a typical London home sold on the market up to just above £475,000. This rate of increase continued through 2014, except in the very centre. London average prices now top £500,000 and nationally the average home rose in “value” by £22,000 in just one year.

Homelessness is also rising, especially among the young. Fewer people are able to secure social housing and less and less money is being spent on the upkeep of that stock. Private landlords spend less doing up their properties while house prices rapidly rise out of the reach of most people in most areas. But it could become worse. In the US an extra million children became homeless between 2006 and 2013. The highest ever US rate of child homelessness was reported in the run up to Christmas 2014.

Priced out or at risk

Fewer and fewer people are able to get a mortgage. In the UK, stricter tests have been introduced to try to prevent banks and building societies lending as recklessly as they did before. There have been repeated warnings to borrowers that at some point interest rates will have to rise. Up is the only direction in which they can go.

At least a third of mortgagees would struggle if interest rates were to rise by just a couple of percentage points. The further house prices in the South of England climb, the greater that proportion will grow as new entrants become more stretched. People who are a safe bet at one point in time can easily lose their jobs, split up from their partners or become ill. Add a slight rise in mortgage interest rates and anyone already struggling to pay the bills quickly gets into arrears.

Prices have risen because the government has been trying to get them to rise. At the end of 2014 the campaigning organisation PricedOut calculated that the government-sponsored new-build Help to Buy programme had helped raise average prices by £46,000 (or 27%) in 18 months, resulting in an additional 258,000 renters being priced out of buying a home as compared to the 31,000 buyers helped by the scheme. Some three and a half million people who would have normally been able to buy a home are now trapped in private renting.

Substandard rentals at ever higher prices

Private renting in the UK is generally appalling as there is so little regulation. We have become used to such low-quality service that we consider poor quality as normal quality. In November 2014 the House of Commons Library reported that 213,000 private tenants had been evicted in the last year after asking for basic repairs to be carried out. A further half a million tenants did not dare to complain about any faults due to fear of eviction. A majority of landlords, some 56%, say they have evicted tenants.

By July 2014 it had become clear that a third of all privately rented property was being rented out in poor condition; this form of tenure was now both the most expensive and lowest-quality sector of housing in the UK. It was also growing rapidly, passing the 4 million households level in 2014, having overtaken social renting in 2013.

When the Financial Times (FT) confronted the landlords with the facts, the National Landlords Association said that “the rented sector continues to mature into a functioning and positive market that is serving renters well [and] costs in the sector have remained static…”. The FT then pointed out that housing under private sector rents take up 40% of tenants’ gross income according to the annual English Housing Survey. For those who own their homes, the figure is 20%, while social tenants paid 30%. In 2014 landlords were laughing all the way to the bank.

In October 2014, just three months after the FT report, rents in the private sector were revealed to have risen to a new all-time-high of £770 a month for the average property in England, £1162 in London. A month earlier they had been £761 a month. A year of such rises would result in a 15% price hike in rents. Even without that, rents are rising faster than inflation, while tenants’ wages still lag behind it.

In November 2014 Citizens Advice published figures showing that there had been a 20% rise in households seeking help over eviction, even among those up to date with their rent payments. Two in five of these households had dependent children. They also revealed that London renters are three times as likely to report problems with vermin than are tenants elsewhere in the UK.

At some point landlords can’t or won’t be allowed to squeeze yet more out of their tenants in higher rents. The housing benefit bill will have to be cut. People won’t take jobs in London if the wages won’t pay the rent. It will most probably be social forces rather than market forces that bring about the end of escalation. The lobby in favour of a change in the law to extend tenancies to three or five years, rather than two months, is growing and represents millions of people. In contrast, private landlords are a small group who attract less and less sympathy during hard times.

Private landlords have, in aggregate, bought up so much formerly owner-occupied and social-rented property that their wealth will have grown by £109.5 billion in the year to April 2015. This is due to the rising value of their existing property and the increases in the rents they charge. The total value of all landlords’ property holdings in Britain will exceed £1 trillion by mid-year 2015, with 41% of those holdings being in London. Just a few years earlier their wealth had been many times lower.

Outside London there are still a few areas where house prices are lower than in 2008, where private rents have collapsed and homes may have to be demolished, and where living conditions are rapidly declining not due to overcrowding but under-use. By October 2014 it took 3.5 average homes in the North East of England to buy one modest home in London; four years earlier that divide had been 2.5 times. By late 2014 the estate agent Knight Frank was predicting that the gap would only grow wider.

In his December 2014 autumn statement George Osborne announced an £800 million cut to stamp duty on the purchase of properties. All his previous budgets had concentrated on measures designed to raise housing prices and the cost of housing, committing more spending or guarantees in that area than any other. Osborne was determined that prices should increase, at least up until election day 2015, and for far longer than that if more and more people are forced to rent.

Only the well off will be able to buy a home in future. Most people will have to rent and enrich a landlord. Just under 80% of people think it is harder to buy a home now than it was a generation ago, even in the hardest times of the recent past. Over 80% of people think the main political parties won’t deal with the problem effectively. This is what chaos looks like.