Angus Hanton, co-founder of the Intergenerational Foundation, sets the scene for our Housing Blog Week (9–13 March) and explains why housing is such an urgent and topical intergenerational issue 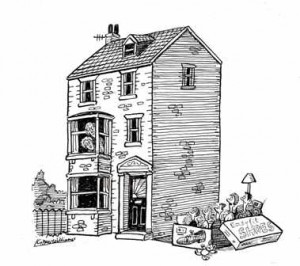 Housing is at the heart of fairness between the generations because it usually outlasts a generation and because creating good housing is a large investment for any one generation to make. However, in the UK the topic has now become even more important because high market values have put homeownership out of reach of most younger people and has given a large windfall gain to older generations.

More building? And where?

There are several aspects to the current housing crisis in the UK. The core problem is shortage of useable supply – which means we are not building enough, some housing is in the “wrong place” and we have an increasing problem of under-occupation with older people rattling around in houses that are bigger than they need or want. There are millions of empty bedrooms at the same time as young people are often paying 40–50% of their income to rent housing. Dealing with these issues is not simple, but we hope these blogs will stimulate debate around solutions and force policy-makers to make housing a priority.

If new homes are to be built, there is heated debate on where they should be. Should we intensify the use of our cities (as the Campaign to Protect Rural England (CPRE) has argued), filling in the many useable gaps and building higher and deeper, or should we challenge the protected status of the green belts around our major cities? Part of this problem is that younger people are facing longer commutes to work than in the past, so organising our housing to reduce commuting times would be really helpful. Nimbyism is alive and well: a campaigner for the elderly recently told me that there is a consensus that “we need more housing but, please, not near us.”

The quality of much of our housing stock is very low and its average age is much greater than comparable housing in Europe. So there is a question of how we can retrofit our homes to make them more comfortable to live in but also how we can adapt them to reduce energy wastage. Even with doubled rates of new building, 70% of the housing stock in 2050 has already been built and most of that was built by the Victorians in the 1880s and 1890s or by developers and councils in the 1920s and1960s.

Ratcheting up the pressure: rentals and buy-to-let

The rental market is deeply dysfunctional from the point of view of many tenants and particularly younger tenants. It appears to be dominated by sub-standard accommodation, short-term contracts and some very greedy agents.

Despite that, the rental sector is growing fast and buy-to-let (BTL) has been boosted by terrific tax advantages. Whether these tax advantages are really helpful is much contested and there is a powerful argument for limiting them to new building, so that BTL would become not “Big Tax Loophole” but “Build to Let”.

Using our housing stock better – about 27 million homes – is about more than encouraging and enabling downsizing, despite the importance of that agenda. It is also about increasing the amount of intergenerational living by encouraging more lodgers. Very often a lodger will be a younger person living with an older person and such arrangements create many opportunities for mutual two-way help and learning. One way to stimulate more rental of rooms might be to increase the tax allowance for homeowners who let out rooms in their homes – this allowance has remained the same for 25 years at only £4,250 each year.

The windfall gain that many in the older generation have received is not costless. The flip side of these gains are sharp increases in what younger people have to pay to buy or to rent, and there are some who argue that part of these housing gains should be taxed or there should be a higher council tax or even a property tax.

Such issues will be aired during our Housing Blog Week. It’s a fierce and urgent debate – and housing will be a key issue in the upcoming general election. Please join in.