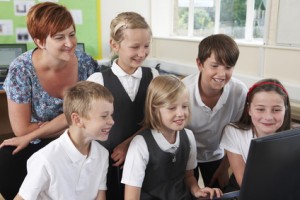 England’s schools are facing a looming capacity crunch because of rising numbers of young people and insufficient government funding, according a new warning from the Local Government Association.

England’s schools, especially in urban areas, are being increasingly oversubscribed because of the high birth rate the country witnessed during the first decade of the 21st century. Between the censuses that were held in 2001 and 2011 the English birth rate rose by 18%, a trend which has been variously explained by improved access to fertility treatments enabling older mothers to have more children, the growing number of foreign-born mothers (who tend to have higher fertility rates) and the increasing share of British-born mothers who are second-generation immigrants (who may be replicating their parents’ tendency to have larger families).

The especially high birth rates that were seen during the 2000s are now starting to have a big impact on schools as those babies are growing up. The Local Government Association warns that 880,000 additional school places will be needed in England alone between 2015 and 2023, at a cost of £12 billion.

The Local Government Association has chastised the Coalition for providing only £7.25 billion in additional funding, arguing that this will not be enough to avoid a shortfall. They are also criticise the Government for its policy of allowing parents and other groups to set up free schools if they are dissatisfied with the ones on offer in their local area, arguing that the majority of the proposed schools will not be in the areas with the greatest demand. The Coalition claims that an additional 200,000 schools places are being created across the country through this policy.

The Local Government Association argues that councils need to be given greater powers to enable them to open more schools without bureaucratic burdens getting in the way – which would be more or less a complete reversal of the Coalition’s emphasis on trying to take schools away from local authority control.

What is clear from the evidence that has been gathered is that the current situation looks increasingly unsustainable. Separately from the Local Government Association, the Labour Party recently used freedom of information requests to all of England’s 152 local education authorities (130 replied), which found almost one in five primary schools (18%) said they do not have sufficient capacity to teach all of their current pupils. The same research indicated that 78% of local authorities believe they will need additional educational capacity by September 2017, showing how widespread the problem is across the country.

This research revealed some of the solutions that oversubscribed schools have come up with to enable them to teach more pupils: a primary school in Northumberland has hired an old double-decker bus to use as a teaching space, while another in Barking has had to replace its car park and school playground with a set of eight portable classrooms.

The most concerning thing about this problem is that the number of school pupils is definitely going to carry on rising, as most of these children have already been born, yet far too little in the way of long-term planning appears to have been done to accommodate this increase.

David Simmons, the chairman of the Local Government Association’s children and young people board, issued an urgent call for action: “We are calling on the government to commit to funding the creation of school places and hand councils the powers to open new schools, for both primary and secondary-age pupils, before time runs out.”

It appears that urgent actions need to be taken if we don’t want thousands of young people to have the quality of their education severely compromised by the failure of those in power to plan ahead.