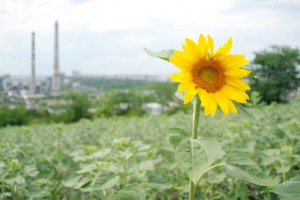 The lecture delivered by Sir David King to the Ashden Awards on 18 November was about the crucial challenge for future generations of how we can stabilise the global population at around 10 billion and then live on this planet sustainability.

The first part of this is well on its way to happening – the global average number of children women are having is now about 2.2, just about the level needed for no further population growth, and this rates is still coming down. The bigger problem is that more and more of our fellow world citizens want the same middle class life style so many of us in the developed world enjoy, with all the environment costs that come with it.

Sir David argued that cities are an important part of the solution, because people use significantly less energy as, up to a point, they live at higher densities. That point is around the density of London, Copenhagen, Tokyo and Singapore. Beyond it, greater density, such as achieved in Manila or Hong Kong, does not do that much more to save the planet.

However, he didn’t go much into the dynamics of this process – how and where new cities are formed, or existing cities densify, and how much it costs to adapt their infrastructure. Having been thinking about the process of urban agglomeration recently, I also wondered about the size distribution of cities, and how this related to density.

Solar power – a beacon of hope?

Maybe another time, but in this lecture David King also wanted to cover other issues, such as the energy costs of food – specifically meat and beef – production, and the declining costs of renewable energy, particularly for solar and wind power. The most dramatic trend is seen with solar power, as it is clear that this new technology is now ready and waiting to solve many of our problems – e.g. providing sufficient clean energy for producing drinking water in the Gulf or South Australia, without having to rely on burning oil or coal respectively.

The most important point I felt I came away with – which Sir David did not make explicitly – was that he was able to say how these problems can be solved because he approached them as a scientist, or maybe as an engineer – the distinction here doesn’t matter.

It meant that he had a reality in mind which allowed solutions and a fundamental “can-do” attitude. It’s a reality I also believe in, so I’m tempted to drop the indefinite article, and just refer to reality, except that I wish to contrast it to realities as perceived by people with different backgrounds. One such background might be as a Town Planner – hence the more specific sort of discussion I was expecting from this lecture. But I also thought of the realities which might be seen by economists and politicians.

Sir David showed a refreshing awareness of the insights of economics, for example in a slide showing the movement of oil prices, and variations in the elasticity of supply affecting volatility. But more important for him – and the world, I’d say – are the insights of scientists and engineers who will have been thinking for a long time about making solar panels more efficient, even as there was no immediate prospect of making much money out of them. Economics is an important social science, but the scientific and engineering imagination matters more – something which I fear professional economists feel uncomfortable with.

Likewise politics, about which Sir David said relatively little, though as a former UK government Chief Scientific Advisor, I’m sure he could (though possibly not publically).

However, politicians understand political realities, from which perspective there may not seem much hope of solutions, at least if the political messages someone hears are dominated by those coming from US-style climate change denialists. He did, however, touch on one very interesting illustration of politics working positively, the case of Bogota, whose Mayor introduced restrictions on the use of cars on the major routes into the city, giving priority to buses and cyclists, while restricting private cars to just one lane.

The result was that people were able to enjoy being out and about in their city. This shows that concerted political action towards achieving sustainability can achieve transformative results – even though it seems an attempt was made to get rid of the Mayor on the grounds that be must be mad not to be able to understand political realities.