David Kingman reports on the findings and recommendations of a controversial new report by the right-leaning think tank the Institute of Economic Affairs, which calls for a set of radical measures to mitigate the long-term debt impact of Britain’s ageing population 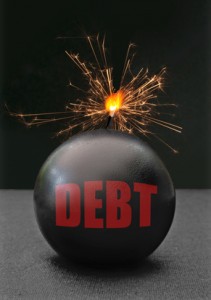 Britain is sitting on top of a “debt timebomb” which is in danger of hurting our children and grandchildren through “crippling” tax hikes, according to a controversial new report from the Institute of Economic Affairs, one of Britain’s leading right-of-centre think tanks.

In Defusing the Debt Timebomb authors Professor Philip Booth and Ryan Bourne argue that the government is still significantly underestimating the long-term financial cost that Britain will incur over the coming decades as a result of its ageing population. They call for a set of radical public policy measures to address this problem, including reducing entitlements to pensions and free public healthcare for some pensioners.

The long-term impact of the ageing population on Britain’s public finances has already been acknowledged by the Office for Budget Responsibility (OBR), who project that the national debt will hit 84% of GDP in 50 years’ time. The IEA argues that, to be sustainable, the national debt can be worth only around 20% of GDP and, even according to the official predictions, achieving this target would require spending to permanently become some 6.5% of GDP lower than it is today almost immediately. This would involve cuts of around £112 billion – nearly the same as cutting all financial transfers to pensioners or abolishing the NHS.

However, the IEA argues in their report that even this figure is over-optimistic, for two reasons. Firstly, it assumes that the NHS will achieve annual improvements in productivity which are above the historic average. If these projections are not realised, then the NHS will need more money to provide the same level of service, so spending is likely to be higher. Secondly, they also argue that immigration levels are likely to be lower than the OBR predicts, based on current policy, and the government is probably going to continue ring-fencing certain areas to protect them from spending cuts for political reasons.

The IEA argues that the cumulative impact of all this is that the government must achieve eye-watering spending cuts worth £168 billion every year from now. Under this vision, the total size of the government would have to shrink by a quarter; it would be equivalent to halving all the money that is currently spent on health, welfare and spending.

In reality, the government would be unable to simply hack away at major areas of public services without engaging in some kind of fundamental reform of how they operate. This is what the IEA goes on to propose in their report: significant changes to economic policy, pensions and healthcare which mostly focus on getting individuals and businesses to do more so that the state can be shrunk.

On pensions, the report argues that the government’s “triple lock” policy (under which the state pension rises each year in line with whichever is highest out of earnings growth, inflation or a floor of 2.5%) is simply unaffordable; they propose that state pensions should only rise in line with the growth in prices instead. They also argue that the state pension age should increase more rapidly than it will under current plans, and that some consideration should be given to charging for or removing entitlements to certain elements of healthcare, perhaps for wealthy pensioners only.

In terms of economic policy, the IEA also suggests that too few older people (especially older men) currently choose to work beyond state pension age. They argue that some aspects of employment legislation still encourage people to take early retirement, which is no longer appropriate for Britain’s ageing population.

Finally, the IEA says that more radical reforms of pensions and healthcare will need to be undertaken in due course. They advocate free market approaches, such as replacing the state pension with a compulsory public defined contribution scheme or turning the NHS into a system of mandatory private healthcare insurance.

While both the exact diagnosis that the IEA offers of Britain’s debt problem and their proposed solutions are likely to prove controversial, it is clearly useful to have more widespread public debate about how Britain should handle the challenge of its ageing population. As Professor Philip Booth, one of the report’s authors, said to the media:

“Politicians must wake up to the size of the debt timebomb in the UK. Older generations have voted themselves benefits that will indebt future generations, meaning crippling tax hikes for our children and grandchildren. Very significant spending restraint and reform of entitlements will be required in the next parliament and beyond to get our debt levels back under control.”