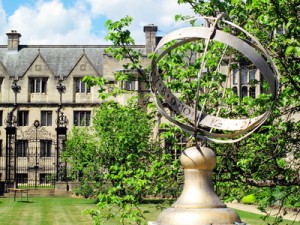 The Oxford Martin School has a very impressive record for intergenerational thinking, showcased in its Commission for Future Generations’ Report “Now for the Long Term” (2013). It involved an extraordinary cast of high-ranking luminaries, including Pascal Lamy (former Director-General of the World Trade Organization: Chair), Lionel Barber (Editor of the Financial Times), Chris Patten (Chancellor of the University of Oxford), Peter Piot (Director of the London School of Hygiene and Tropical Medicine), Martin Rees (former President of the Royal Society), Amartya Sen (Nobel Laureate, Professor of Economics and Philosophy, Harvard University), Nicholas Stern (President of the British Academy, author of the Stern Review on the Economics of Climate Change), Jean-Claude Trichet (former President of the European Central Bank). You get the picture.

One year later, on 21 October 2014, the Oxford Martin School Programme on Human Rights for Future Generations hosted a conference entitled “How can institutional mechanisms safeguard for tomorrow, today?” Essentially, it addressed a question that is vital to all those who interested in intergenerational justice: how can we stop governments and associated institutions from thinking only in the short term.

Short-termism is often seen as an inevitable side-effect of democracy, where governments look first and foremost to their voters and re-election, rather than to the longer-term future, let alone the distant future. What can be done to counter this trend – to make governments analyse and measure their policies in terms of sustainability and intergenerational justice?

The conference was introduced by Professor Ian Goldin, Director of the Oxford Martin School, who gave a succinct summary of the “Now for the Long Term” Report, as a background context to what was to follow.

The first half of the conference was devoted to the more academic side of the subject. Simon Caney, Professor of Political Theory at Oxford, talked about ways of “deepening democracy” and offered three proposals for promoting intergenerational justice: institutionalising long-term thinking through such mechanisms as a mandatory “State of the Union Speech” in which governments would have to outline their vision of Britain in 50 years time; setting up a Select Committee on the governing the future; and audit systems that measure performance in intergenerational justice.

Juliana Bidadanure (European University Institute Florence) called for the “Youth-ing” of Politics, using such mechanisms as Youth Quotas. Professor Jörg Tremmel (University of Tübingen) proposed adding a new, fourth power, to represent future generations, to the traditional threesome in the separation of the powers (executive, legislature, judiciary); this would ensure a long-term perspective, so that those in the future, who will be affected by decisions made today, would be represented. Dr Peter Lawrence (Faculty of Law, University of Tasmania) proposed the creation of a “transgenerational demos” in which future generations would be represented by proxies under international law in such areas as climate change negotiations and issues of accountability.

The second half had a more practical focus. Peter Davies, Wales’s Commissioner for Sustainable Future, described the Welsh government’s pioneering work in creating a framework for analysis and accountability around its strategy of long-termism, enshrined in the “Wellbeing of Future Generations Bill” currently going through the Welsh Assembly. This is a remarkable initiative, which depends upon an institutional structure with the powers to monitor and measure legislation and the action of all departments, reinforced by initiatives to gain and maintain public support, and a sense of public “ownership” of the project.

Oras Tynkkynen is a Finnish MP (he was Finland’s youngest MP 10 years ago) who serves as Vice-Chair on the Finnish Committee for the Future – an institution now 20 years old that behaves as a kind of “parliamentary think-tank” looking at such issues as sustainable growth, the introduction of new technologies, and the future of the welfare society. While it does not actually scrutinize parliamentary bills, it serves as a kind of “secret agent within parliament” that challenges conventional wisdom.

Catherine Pearce, Director of Future Justice at the World Future Council, identified the principles for bodies working for future Justice – independence, effectiveness, transparency, legitimacy (democratic standards) and accessibility for scrutiny – and described the progress towards creating a High Commissioner for Future Generations at the United Nations, which would, of course, be a significant landmark.

Biting the hand that feeds them?

These examples of how such issues as long-termism, sustainability and intergenerational justice are being put into practice are encouraging. But – as all the speakers were careful to note – many challenges lie ahead.

The Welsh and Finnish examples offer interesting models. But we may have to go back to the theorists to see how they can be sufficiently embedded in constitutions to ensure their own long-term futures.