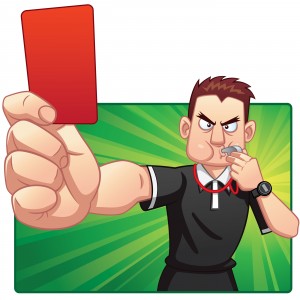 The Coalition Government – which Prime Minister David Cameron said in 2010 he wanted to be remembered as the “greenest government ever” in Britain’s history – deserves a “red card” for its performance in policy areas which relate to the environment, according to a committee of MPs.

The House of Commons Environmental Audit Committee has recently released a new report which criticised how the government has performed on a number of points, especially in relation to reducing air pollution, protecting biodiversity and preventing flooding. This criticism comes at an embarrassing time for Mr Cameron, ahead of his speech at the UN climate summit in New York on 23 September, where he is expected to emphasise the importance of securing a global deal to fight climate change.

The Environmental Audit Committee attempted to benchmark how the Coalition Government was performing across 10 areas of environmental policy which are seen as important, giving them either a green, amber or red “card” depending on what they found.

One of the most serious areas where the Government received a “red” card related to air quality. Britain’s air quality – measured by looking at levels of airborne pollutants – deteriorated in 2013, and the UK falls so far short of meeting the EU’s minimum safety standards on air quality that the European Commission is taking Britain to court, arguing that the current level of pollution poses an unacceptable level of risk to British citizens.

The committee’s chairman, Joan Walley, warned that younger and future generations will suffer as a result: “A whole generation of young people in our cities will potentially have their health impaired by pollution before the government meets air quality safety standards.”

“Red” cards were also given to the Coalition in relation to biodiversity, as a result of declines in the key bird populations which are used as a barometer for the state of the UK’s wildlife, and with regard to flooding and coastal protection, an area where measures to improve Britain’s natural flood defences have failed to satisfactorily reduce the risk of flooding.

In order to catalyse the pursuit of better environmental quality at the heart of government, the commission made two particularly significant recommendations. First, they recommended that the Government should produce an overarching environmental protection strategy which will include a long-term timetable for implementing measures over the next 5, 10 and 25 years. Secondly, the commission advocates that a new “Office for Environmental Responsibility” needs to be established in order to monitor how the long-term environmental strategy is being achieved and benchmark progress towards its goals. This new body would also be informed by experts who would be able to advise the government on what it should do to try and improve environmental quality.

The report was released the week before David Cameron is due to speak at the UN climate summit in New York, which is widely seen as a key staging post on the road towards the major UN Climate Conference that will take place in Paris in December 2015. The hope of climate activists around the world is that this event will lead to the participating countries agreeing on a genuinely meaningful, legally binding global climate agreement to replace the Kyoto Protocol.

Of course, we’ve been here before: in 2009 the UN convened a previous global climate conference which had the same lofty ambitions, only to see genuine agreement fail to emerge between the negotiating parties. It is hoped that the worsening of the global environment since then will weigh heavily upon the minds of those who will be negotiating this time around, but as the Environmental Audit Committee’s report shows, there is plenty of work still to be done even in a country like the UK where the government expresses lofty ambitions about protecting its natural heritage.