IF volunteer Connor McCarthy reports on how inadequate student loans have made students vulnerable to market loans, and created a barrier to postgraduate study, with short- and long-term impacts 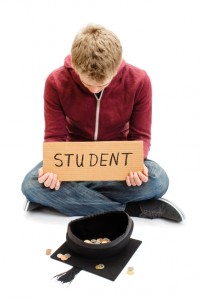 Expenditure and income: a growing disparity

The stereotype of a student often evokes images of a cash-strapped bargain-seeker struggling to get by. This situation is increasingly common according to a report by The Money Charity, which claims that university students are being “set up to fail”, some being left with as little as £40 per week to live on. The growing disparity between student expenditure and average income from loans and grants has forced young people to rely more on The Bank of Mum and Dad to get by. However, for many students from low-income families this is simply not possible.

This has led to a rise in companies offering private student loans to help supplement the difference. One company, Future Finance, explicitly aims to “fill the funding gap between government loans and the actual cost of attending university”. The interest rates – although not extortionate at between 10 and 15% for students with an “average credit history” – are still much higher than government student loans at 6.6%.

Moreover, charges such as a 6.5% “origination charge”, as well as charges for defaults and charges for warning letters can (although stated in agreements) cause debts to rack up much faster than expected. As those who are most vulnerable will be most likely to take out these loans, it can cause the most in need to be the most in debt.

This is compounded by the ease of access of many of the loans, with Future Finance providing a speedy sign-in link via Facebook, suggesting a specific targeting of students, and younger people in general.

In 2012 payday lenders such as Wonga were also criticised for specifically targeting students going through hardships, and even encouraging taking loans from them to go on holiday. Up to 46,000 undergraduates may have borrowed from payday lenders in the last year, according to the NUS, 2% of the total number of students.

It is the government’s role to offer loans that adequately cover student expenditure, and by not doing so, it is leaving the most vulnerable students exposed to further debt, some of which can escalate rapidly.

For postgraduates, the situation is even more dire. The government offers little funding for postgraduate study, and students often rely on money from charities, the university, their family, or research grants.

Many who still wish to continue with postgraduate study are unable to do so due to lack of access to these sources of funding. The only initiative offered by the government is a Professional and Career Development Loan (PCDL): bank loans that help you with your career, or getting into work. Offered officially by Barclays and the Co-Operative Bank, interest rates are set at 9.9% APR for 5 years for loans of up to £10,000, with the government paying the interest on the loan for the duration of the postgraduate course.

The repayment conditions have been described by the House of Lords Science and Technology Committee as“fairly onerous”, and the popular finance website MoneySavingExpert.com urges students to pay off the loan as soon as possible, using an ordinary personal loan at a lower interest rate to pay it back to avoid debt racking up.

Other companies are offering similar loans that are not government endorsed. The start-up StudentFunder offers crowdfunded loans at 8.1% APR, a seemingly better rate than PCDLs. However, an administration fee of up to £480 must be added, and, although repayment is deferred for 18 months, the interest continues to build over this period, unlike with the PCDLs, so costs can soon be higher than anticipated.

HSBC also offers larger graduate loans of up to £25,000, starting at 3.9% APR, but repayments begin immediately, often still leaving students reliant on funding from elsewhere to pay the loan back, such as taking a part-time job alongside studies. This could hinder their academic performance, meaning those who already struggle to fund their education could also receive a poorer quality education due to the worry of meeting loan repayments.

The NUS found that two-thirds of students surveyed said that even a small amount of commercial debt hindered their ability to concentrate, and would even make them consider dropping out. Others, especially those in non-vocational subjects, such as English, simply believe the debt is too much, and that financial help from the government is too minimal to risk pursuing a postgraduate qualification. A Futuretrack study, compiled by the Higher Education Careers Services Unit and the University of Warwick, found that 50% of graduates surveyed would have liked to pursue further study, but did not, primarily because they were averse to taking on more debt.

Overall, the UK currently spends less than the OECD average on higher education, yet the government refuses to increase spending to help reduce the disparity between loans and expenditure at undergraduate level, and is reluctant to provide any sort of funding at a postgraduate level. This hinders those who are currently studying who struggle to fund their degree, and acts as a barrier to those who wish to further their studies.

It’s no wonder that the UK offers a smaller proportion of postgraduate degrees than Finland, where nearly half of annual university degrees awarded are postgraduate or higher. The government does offer university hardship funds, which provide students with loans that have low or no interest to help get them through rough patches, but these are not widely promoted. Debt is still a major worry, and discourages many from continuing to higher education.

The lack of government funding leaves students vulnerable to a variety of issues, including trouble financing their living costs, being susceptible to further debt from private loan companies, worry about meeting loan payments, and even acting as a barrier to further postgraduate study. This leaves a generation of students that are debt-ridden, with many under-qualified compared to their potential, hindering future job creation and competitiveness in the economy that they will eventually inherit.

Liam Byrne, the Shadow Minister for Universities, Science and Skills, has underlined how one of the key components of ending the present “cost of living crisis” was more “inclusive growth”, “with more high-skilled and high-paid jobs”, which comes largely from universities. Poor funding acts as a barrier to these “power stations of the knowledge economy”, meaning it is not only individuals that are hindered, but a generation’s future competitiveness in the global digital economy.

In an era where pensions make up a sizable proportion of budget spending, a more intergenerationally fair investment in higher education could address the vulnerability of students to a range of detrimental short- and long-term issues.