IF volunteer Aleksandra Blawat reports on how the inadequate provision made for students’ living costs by the Student Loans Company (SLC), compounded by the unscrupulous practices of the private rental market, leave students unable to meet their costs of living 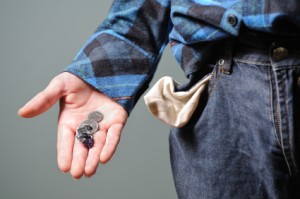 NUS figures show that the average London-based student’s expenditure on living costs is £23,521 per academic year, while the average income they get from loans and grants is £17,450. The maximum they can receive is £20,979, which still falls short of covering living expenses. Who fills the gap?

The disparity is even more striking outside of London: average support totals £14,370 while average expenditure is £22,189 – a shortfall of £7,819 per year. This is a significant burden on students, which even those in receipt of university bursaries or scholarships find hard to meet.

With tuition fees at unprecedented levels, the inadequate provision for students’ living expenses will only discourage young people from attending university. This is clearly generationally unfair, as previous generations benefited from higher education funded entirely by taxpayers.

A report from Family Investments has revealed that 79% of parents start putting away money for university as soon as their child is born. For a family where both parents earn £21,500 (less than the national average each), a child will not be eligible for any support beyond the basic loan. Maintenance support is based on parents’ income, despite the fact that students over 18 years of age are considered legally independent from their families, who face no obligation to help them with the costs of university.

The NUS warns that those who do not get help from their parents may be forced to take on full-time work, rely on predatory lending, or drop out. If the current maintenance loan system does not change, university education may simply become a privilege of the children of wealthy parents who are willing to shell out the money.

High rental prices lead more than a third of students into debt to meet the costs of paying for a property. For many students, more than half of their loan will be spent on accommodation. Despite this, more than three-quarters of students live in poor-quality accommodation, says the NUS. Over half of students surveyed report condensation and mould, and a quarter have to deal with maggots and rats.

The NUS is calling for stricter regulation of letting agents and an end to hidden letting fees, which would give students a better idea of the total costs of renting a property. Additionally, they propose that student finance be paid monthly, instead of three times a year, to allow students to get accustomed to budgeting on a monthly basis. While a helpful suggestion, it does not address the problem of the shortfall between students’ needs and what is being provided for them financially.

The unaffordability of student living is only going to become a larger problem as increased numbers of students accept university places this year. The average student rent is rising by 3.1% a year while the SLC increases the provision made for students’ cost of living by only about 1% a year – despite increasing the interest rates on student loans based on RPI.