IF volunteer Thomas Brookes reports on a speech by Chris Leslie MP in which he highlighted some of the challenges facing “Generation Rent”, and hopes that it will provoke further inter-party discussion and proposals to remedy the situation 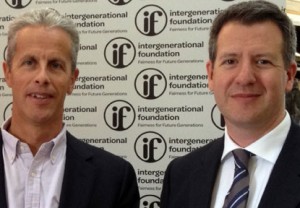 Chris Leslie MP, Labour’s Shadow Chief Secretary to the Treasury, last week pledged to establish a “UK Advisory Forum on the under-35s” if his party wins next year’s General Election. Speaking at an event hosted by Camden Working Men’s College, and chaired by Intergenerational Foundation’s co-founder Ashley Seager (pictured with Chris Leslie, left), Leslie promised to create an Advisory Forum on the under-35s to match the “Forum on Ageing” set up by his party’s last government in 2009. Such a forum would allow the government to assess the impact of policy concerning young people and improve its accountability.

Economic potential of the young undercut by wage decreases

Leslie identified the potential of the UK’s young labour force and highlighted some of the issues which they face, before proposing a number of policies which a Labour government would introduce to redress the balance. In research published just last week, the Office for National Statistics analysed the “human capital” available in the UK: a measure of the potential future earnings of the UK’s labour market. Referencing this research, Leslie noted that while the under-35s represent only 40.1% of the population, they offer 66.2% of the country’s human capital.

Despite the great worth which under-35s represent to the UK’s future growth, Leslie argued that current trends paint a bleak picture of the realities of living as a young person. Average weekly wages for the young, for instance, have fallen since 2010 at a faster rate than they have for older generations. The youngest age group in particular, those aged 18–21 years old, have seen their real terms weekly incomes fall by 10.3%, while those in their 40s and the over-60s have seen falls of only 6.8% and 4.8% respectively. This faster rate in the decrease of average wages, Leslie showed, has led to an increase in the intergenerational pay gap: which now stands at £6,318, up from £5,304 in 2010. These figures echo the findings of a recent IF report entitled “Squeezed Youth: The Intergenerational Pay Gap and Cost of Living Crisis”.

Given the challenges facing younger generations, Leslie argued that it is about time that political parties respond with policy. He identified several proposals made by his party which ought to go some way towards alleviating the pressures on young people.

First of all was the proposal to ban zero hours contracts, which, Leslie argued, have led to income insecurity, lessened the ability of the young to make long-term plans, and have thus blighted their possibilities of securing a mortgage. Even more strikingly, Leslie drew on additional research from the ONS in which the organisation attributed the recent drop in the birth rate – down by 30,000 in 2013 compared to the previous year – to uncertainty surrounding employment, which could itself be the result of zero hours contracts.

In addition, Leslie claimed that the current problems of home ownership among young people – illustrated by Halifax Building Society’s finding that 36% of those aged between 20 and 45 feel they have no prospect of owning a home within the next five years – could be remedied by Labour’s pledge to build 200,000 homes a year by 2020. Moreover, he suggested that the party would explore methods of boosting the supply, such as a Help-to-Build scheme for SME house builders.

The Shadow Minister also proposed a jobs guarantee, the offer of training for under-25s out of work for a year or more, and tax credit savings for employers offering a Living Wage, all of which could be paid for by levying a mansion tax on properties worth over £2 million and by a repeat of the banker bonus tax first implemented in 2009.

While maintaining that the last Labour government were right to establish the “UK Advisory Forum on Ageing”, Leslie suggested that it was now time to introduce a counterpart responsible for younger generations, perhaps named “UK Advisory Forum on the under 35s”. Doing so would go some way towards ensuring governmental accountability to young people, a demographic who, as Leslie has argued, are rich in potential but low on targeted proposals.

But is it enough?

While welcome, the question remains as to whether these proposals go far enough. New home building and better protection against zero hours exploitation are policies which will help young people tangentially, but there remains a lack of proposals specifically created to benefit younger generations.

Moreover, with less than a year until the General Election, we have yet to hear what the Conservatives or the Liberal Democrats have to offer young voters. As Chris Leslie highlighted in his speech, the economic potential of young people is at risk of lying unplumbed. Yet the electoral potential of young voters has also largely been left unexploited. Thus, while it is in the interest of the country to ensure that their economic potential is fulfilled, it is in the interest of the political parties to respond to Leslie’s bold thinking and further the debate on youth-targeted policy.