IF volunteer Aleksandra Blawat explains why the government favours the interests of older people, and how our essay competition represents an opportunity for your voice to be heard (plus, win prizes!) 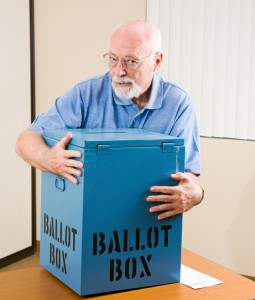 However, one of the biggest problems facing Britain’s democracy is that older people are far more likely to vote than the young. In the 2013 local elections, only 32% of young people voted, compared to 72% of those aged over 65. IF research has shown that 65-year-olds have seven times more voting power than 18 year olds. As people live longer, the median age of a person in the UK is increasing, strengthening the power of the ″grey vote″.

Arguably, this gives the government an incentive to implement policies that favour the welfare of the old at the expense of the young. Politicians who are chasing the votes of older members of the electorate are more likely to focus on policy areas that these voters are especially concerned about, such as pensions and immigration. Issues that mainly appeal to younger voters – such as housing, unemployment and higher education – tend to get squeezed out.

House prices have been rising, boosted by the failure of successive governments to increase supply. This benefits people who own houses, who tend to be older, but it hurts young people who are struggling to save up for a mortgage. The current Government’s welfare reforms have also disproportionately targeted young people while leaving pensioners’ benefits untouched. This seems to be an on-going strategy: at the Conservative Party conference in 2013, David Cameron suggested cutting benefits for the under-25s.

In the past few years, employment and real wages have fallen most among young people, but pensioners have benefited from universal benefits (including winter fuel payments, free bus passes and free TV licences) as well as the generous ″triple lock″ on pensions. For the first time, pensioners are less likely to be poor than people of working age. There is an overwhelming sense that young people are really struggling in contemporary Britain, yet our politicians simply aren’t doing enough to help them.

Do you think current policies are unfair? How would you encourage young people to vote? What do generations owe each other and what policies can be put in place to protect the rights of future generations?

If you are an A-level student who thinks these issues matter, enter the Intergenerational Foundation’s essay competition! Write a manifesto on the topic of “What would a 2015 manifesto say if young people mattered?” The winner will be published by the New Statesman and IF, win £50 of personal book tokens, and £250 of book tokens plus a one-year subscription to the New Statesman for their school. The deadline for entry is midnight on 1st October. Click here for details.