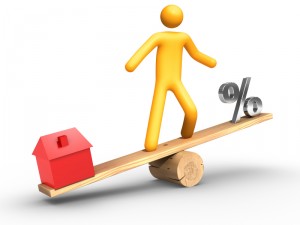 UK interest rates have now been maintained at a historically low level for over five years in response to the economic crisis the country has had to endure. On 8 May the Bank of England announced that it would continue with this policy, assisting young people who have managed to get a foot on the housing ladder by ensuring that the cost of servicing their mortgages will remain low.

However, a rising tide of expert opinion has begun to argue that the economy has recovered enough for Britain to introduce higher interest rates. This would be good news for some groups – not least older savers, who are trying to live off the returns of their investments – but it could have the worrying side-effect of making it even harder for members of “Generation Rent” to purchase their own homes.

At its heart, this issue comes down to a simple number: the Bank of England base rate, also known as the Bank Rate. This is the amount of interest which Britain’s central bank charges commercial banks to borrow money from them. It ripples through into our everyday lives because it essentially determines the cost of money throughout the British economy; a low rate is passed onto consumers in the form of cheap borrowing costs for mortgages and personal loans and low rates of return on our savings.

The Bank Rate is set by the Bank of England’s monetary policy committee, a group of economists who are charged with the task of trying to maintain stability in Britain’s economy. Ever since the financial collapse of 2007 they have kept rates at 0.5%, an extremely low level by historical standards, the idea being that this will encourage people to borrow money cheaply and spend it rather than saving it, in order to try and stimulate the economy.

One of the impacts of this era of cheap money has been that it has become easier for some young would-be homeowners to get on the property ladder, because the monthly cost of repaying a mortgage has been extremely low. Of course, for many would-be buyers the cheapness of mortgage repayments has been offset by the increase in the size of required mortgage deposits, which have risen to between 20% and 25% of the purchase price on average. Low interest rates also have also had the negative effect of making it harder to save towards a deposit, because money in the bank generates less of a return.

Yet for those young people who have been able to get over the high barrier to entry to the housing market which large deposits have created, the last few years have been the ideal time to get on the housing ladder. Unfortunately, there are now signs that this period may be coming to an end.

Time for a rise?

The problem is that low interest rates are not good for everyone. People who are trying to live off their income from savings and investments lose out from lower returns. Making money available too cheaply also increases the risk that investors will create bubbles by using it to purchase assets for more than they are really worth, leading to turmoil when the bubbles burst.

There’s a chance that a prolonged period of low interest rates may be especially dangerous for an ageing society, such as Britain’s, because it can lead to pension funds becoming underfunded. This is a serious concern when most people aren’t saving enough for their retirement as it is, and 11 million British adults are thought to be at risk of having an inadequate income in old age.

Robert Peston, the BBC Economics Editor, has recently suggested that the voices calling for a rise in the Bank Rate are growing louder. He argues that mortgage rates are already beginning to creep upwards again, in preparation for an official rise at some point before the general election next year.

This won’t just be bad news for new mortgagors who are still dreaming of buying their first home; it will also have a big impact on all those homeowners who have bought during the last few years on mortgages which are many times greater than their annual salary, which they would have struggled to afford under normal interest rate conditions. (Those with fixed-interest mortgages will have respite from the pain – until the fixed-interest term expires.) Householders in their twenties and thirties with large mortgages are responsible for a big share of Britain’s household debt mountain, which currently stands at an eye-watering 170% of GDP.

Owing to the cost of living crisis which is affecting these age groups, among whom real incomes have been stagnant and falling since before the recession – problems highlighted by IF’s recent report, Squeezed Youth – there may be many who simply cannot afford the cost of their debts if interest rates rise. This is one reason why the Bank of England has been so cautious, even though the economic news has been improving in recent months, and why they will need to move slowly on raising the Bank Rate to avoid triggering another financial crisis.

This is also part of the explanation as to why the rules for issuing new mortgages have recently been changed, so that lenders have to build up a full picture of the borrowers’ financial position before they offer them any money – including how vulnerable they could be to rises in interest rates.

What it all adds up to in total is that the millions of young people who still dream of one day buying their own home are finding it harder and harder to get a toe through the door. And even some of those who think they have made it safely onto the property ladder should be prepared to have it pulled out from underneath them again.