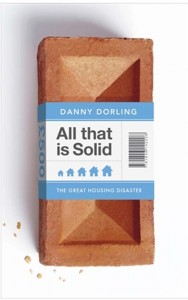 All that is Solid: The Great Housing Disaster

by Professor Danny Dorling (Published in the UK by Allen Lane; 378 pages)

Britain’s current housing crisis is one of the great social and economic issues of our time. This was illustrated perfectly by a recently-released tranche of ONS data that showed just how dramatic the crisis has become on almost any statistical measure. To take just a handful of examples, the average UK property now costs £242,000, or a staggering £424,000 in London; average prices nationwide have more than trebled in real terms since 1990; typical first-time buyers now have to save up nearly 25% of the value of the property they are buying as a deposit, compared with around 12% in the late 1980s, and the price paid by typical first-time buyers in London is now almost five times average earnings, a ratio that has nearly doubled from around two-and-a-half times three decades ago.

Indeed, there is now so much available data on housing which can be used to paint a negative picture that the results often seem bewildering. This is where All that is Solid, the new book by Professor Danny Dorling (the Halford Mackinder Professor of Geography at the University of Oxford), makes its most valuable contribution to the debate. Not having a background as an economist – unlike the authors of most books on the housing crisis – Professor Dorling chooses not to illustrate many of his arguments with statistics; rather his interest lies in the human stories that lie behind this great mass of data on housing.

To Professor Dorling, housing is first and foremost a form of shelter, a basic necessity which all animals require in some form. He is deeply interested not just in what housing is worth, and how it is paid for, but in the broader issue of what housing represents; what does the way that our society provides shelter, and the things we do with it – locating it, designing it, building it, decorating it, using it and demolishing it – say about us? Throughout the book, the text is interspersed with striking images which depict the huge variety of ways in which people treat housing, mostly taken in Sheffield where he was based when he began work on the book. Unfortunately, the picture that Professor Dorling paints when he pulls all these threads together doesn’t show modern British society in a very favourable light.

Our housing crisis, Professor Dorling argues, is at its heart an expression of the shocking degree of inequality which cuts across contemporary British society. Unlike the authors of many other books and reports on how we should address the housing crisis, he doesn’t start by arguing that we can solve all of our problems just by building more houses. Instead, the crux of his argument is the highly significant fact that the British Isles have never previously contained more dwellings – or more rooms within those dwellings – than it does in the modern age. In his view, the real problem is the extremely unequal manner in which all this property is allocated, a trend which has been growing more unequal since the 1980s when, for the 30 years before that, the ownership of housing had actually been getting steadily more equal. Achieving a more equal distribution of the nation’s housing stock would require wide-ranging reforms to the whole of Britain’s economic growth model, which seems to have fostered inequality by focussing on activities which create a relatively small number of very high-paying jobs for a fortunate few, such as banking and insurance.

Danny Dorling argues that overall inequality has increased housing inequality in several ways, not only because bankers and other wealthy individuals have been investing all the money they’ve made in property, but also because a system which is unequal at the top makes people who are further down the wealth scale feel that they need more resources in order to be secure; in Britain this has manifested itself through the large numbers of middle-class families who have sunk all of their savings into property wealth, fuelling a buy-to-let boom, because it offered this offered the surest path towards greater prosperity. Those at the very bottom – the poor and the homeless – have been virtually cast adrift, he argues, as they have been left entirely at the mercy of the wealthy when they try to solve their basic housing needs.

The solutions which Professor Dorling proposes would all involve attempting to redistribute the supply of housing so that it becomes more equal. In particular, he advocates reforming the Council Tax system so that it penalises people much more heavily for owning larger properties and introducing new taxes to penalise the owners of empty property which could be used to house those in need, alongside some rather more radical solutions such as de-criminalising squatting by the housing have-nots, reintroducing rent controls on landlords and making it much harder for lenders to evict mortgage-holders who get into arrears from their properties.

Of course, whether the politicians think that such radical solutions are the right answer is another matter entirely; but the manner in which his approach takes a much broader view of housing than many other commentators do makes it a welcome contribution to the debate.