Kenny Imafidon, 20, is an advisor on youth policy as well as a Trustee of the British Youth Council, which represents over 7 million young people across the UK under 25. Lewisham youth worker Melissa Jane Knight interviewed him on behalf of IF to sound out his views on the importance of voting and lowering the voting age to 16 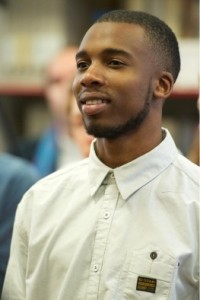 Kenny has been championing the views of young people at local, regional and national level since he was 16. He is the author of The Kenny Report, which seeks ways in which we as a society can resolve many of the socio-economic issues young people and their families face across the UK (new report to be published later this month).

Kenny, we first met as you were asking an audience of young people their views on lowering the voting age, what did they have to say?

The Lewisham young advisors were very much in favour of the lowering of the voting age to 16 years old. They did explicitly mention that politics should be taught in secondary school, but taught in a way which is interesting and appealing to young people.

Why is this topic so close to your heart?

Once I was made aware of how many rights and entitlements young people have at 16 and 17 years old and then realised that those in that age group were disenfranchised from their right of vote and having a say at the ballot box, I couldn’t believe it at all. It is a clear injustice against 16 and 17 year olds which needs to be rectified by Parliament. Hopefully those opposing the lowering of the voting age who read my latest report will be convinced that Votes at 16 does work and can work if done effectively.

Your previous report has had wide support; can you tell us why you think that is? (And briefly summarise the contents.)

The first report I wrote – called The Kenny Report: How do politics and economics affect gangs and serious youth violence across the UK? – has received interest from many politicians and young people because it informs the readers about youth violence from a 360-degree perspective, and it gives them unique insight into the lives that many young people growing up in areas like mine face. Many of the readers of The Kenny Report also mention that – unlike the many other reports they read about the issues young people face – this one is actually written by a young person (when I was 19 years old) which makes it a refreshing read for them.

The report explored how key areas of social policy such as health, education, housing, and employment and the budget cuts in the youth sector and public sector, such as the EMA cuts and tuition fees, are affecting young people overall – particularly those young black people growing up in deprived communities. Crucially, it also gives examples of the services best-equipped to tackle these problems, and others that have long outgrown their usefulness.

Do you think politicians are listening to young people?

No, I don’t feel politicians are listening to young people and it is evident in the policies they have been implementing over the years, such as: the tripling of tuition fees, the scrapping of EMA, and the cuts in youth services in many local authorities. All these policies have really affected young people, particularly those from low-income families. The aspirations of young people are constantly being ignored, and it seems that whenever most politicians seem to be listening to young people it is just a tokenistic listening exercise. Far too many young people feel hopeless and that nothing will change even if they make a massive stand against a government proposal, a perfect example being the march against tripling tuition fees.

Often young people are seen as too immature or hedonistic to make serious political decisions. Has this been your experience?

Yes, there are young people that are immature or hedonistic but it is not fair to say that most young people represent this stereotype because there are many young people that are well informed and mature enough to influence the political decisions that dictate their lives. Being young doesn’t always have to correlate with immaturity. There are many adults who are very immature and uninformed but we cannot say – based on that finding – that all adults shouldn’t have the opportunity to influence policy or vote.

There has been much debate about whether anyone’s vote really counts. What do you say to the apathetic?

You cannot change things by standing on the sidelines. You have to take part. We have to be registered and exercise our right to vote. If we don’t vote then others will, and they will not have our interests at heart. Therefore, they will choose the same type of out-of-touch politicians we have now.

What would be the ideal outcome of your new report once published?

Ideally I would like all recommendations implemented by the relevant bodies. I would also love to see more young people registered to vote and voting as well as standing up to be politicians.

If we do not like the politicians in our Parliament then more of us should stand up as candidates ourselves, particularly young people. We need a parliament that represents our society.

NOTE TO READERS: Are you leading change for young people, or part of an organisation that does? IF would like to hear from you. Email [email protected] and get your voice heard.