The politically-motivated closure of an NGO by the government of Ecuador raises fundamental questions about politics and short-termism. IF volunteer Adam Broadbent explains 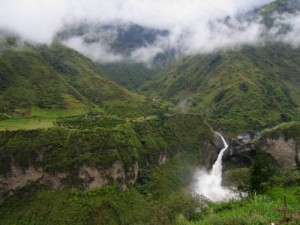 The Fundación Pachamama (named after Pachamama, the Mother Earth figure in Inca mythology) was an Ecuadorian environmental protest group whose main focus was to campaign for alternative development pathways for Ecuador, with a focus on reducing environmental damage, respecting human rights and the rights of nature. In June an executive decree gave the government tighter powers over NGOs and on 4 December police came and shut down the offices of Fundación Pachamama in Quito, leaving a resolution from the Ministry of the Environment proclaiming the organisation to be dissolved. The justification behind this act is a dubious accusation that Fundación Pachamama promotes dissent and violence, a claim that is totally refuted by the organisation. The sudden shutdown of this protest group displays a complete disregard for the democratic right to peaceful protest and also highlights how the unsustainable use of resources is a key intergenerational issue.

Using the forests and resources that we have today in a sustainable way will ensure that the benefits they provide to the current population will still exist for future generations. The UN Food and Agriculture Organization (FAO) estimated that in 2012 Ecuador’s deforestation rate was one of the highest in the world at 1.8% per annum, a level which is clearly unsustainable. Unsustainable resource use is a global issue but instead of working with NGOs to find alternative, less destructive, development pathways the Ecuadorian government’s decision to directly shut down Fundación Pachamama highlights their short-termist perspective.

Bill Twist, CEO and co-founder of Fundación Pachamama’s sister organisation The Pachamama Alliance, argued that “the real reason the government has targeted Fundación Pachamama is because of the effectiveness of their work.” He further claims that the forced shut down is “an attempt to keep them from doing their work, and chill their rights to free speech and assembly.”

Clearly the Ecuadorian Government is failing both current and future generations in a reprehensibly undemocratic fashion. The decision to open up more land for mining and logging whilst simultaneously quashing democratic protests is nothing more than an attempt at engineering a quick economic fix, the true costs of which “are generally not borne by companies…these costs tend to fall on society, on future generations”, according to The Economics of Ecosystems and Biodiversity (TEEB), a long-term study which analyses the economic damage caused by the loss of biodiversity.

The use of natural resources for short-term gain disregards what a philosopher would call the “negative rights” of future generations. Negative rights are rights that create an obligation to not behave in a way that infringes upon these rights. If we agree that all humans (including those not yet born) have the right to water, oxygen and a hospitable climate, then the Ecuadorian Governments decision to threaten and reduce these resources disregards its “negative obligation” to society by harming the rights of future generations.

With a growing population and increasing scarcity of resources there is a mounting tension between meeting current demand and simultaneously safeguarding the needs of the future. Although resource-rich countries can share with future generations some of the spoils from exploiting them by setting up a sovereign wealth fund (Norway and Australia provide two of the best current examples of this approach), this does nothing to protect the natural environment, as extracting the resources in the first place is still likely to cause a lot of damage.  True sustainability can only be achieved if the global economy undergoes a monumental shift in order to become less resource reliant, less short-term and more focussed on the needs of future generations.

Sadly, the short-term perspective which has been adopted by the Ecuadorian Government is all too familiar in global policy-making. Former Irish president Mary Robinson described the  Rio+20 summit that took place in June 2012 as a gathering of leaders “without an intergenerational vision [who] failed to rise to the challenge” following the failure of the politicians who were present to properly commit to working towards a more sustainable future. Rio+20 had the potential to make groundbreaking progress on the intergenerational issues of protecting the earth and safeguarding resources for the future, but this proved to be impossible when a number of important leaders, including Barack Obama, David Cameron and Angela Merkel, did not even choose to attend. Although today’s politicians may think short-termism is in their interests, the inconvenient truth is that a political view that only deals with present-day challenges without taking a long-term intergenerational view will magnify those same challenges for the future.

Perhaps the current multilateral global structure is simply not capable of providing the solution. The London-based think-tank Green House has argued the need for a structural change. Green House suggested that to gain a proper intergenerational perspective, future governments need to be held accountable to a higher international body. This “Guardian” would act as a “3rd legislative house” to judge and veto policies that would have a negative impact on the rights of future generations. Although this seems unlikely to happen any time soon, the growth of powerful supranational bodies such as the United Nations and the European Union does show that national governments can be willing to cede authority. Proper international cooperation and a global economic environment that reflects the true cost of resource use, both now and in the future, is the only way we can secure a sustainable future.