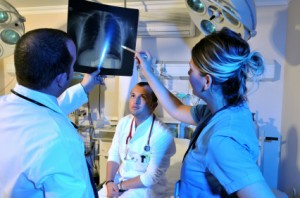 Accident and Emergency (A&E) Departments appear to dominate much of the media coverage that is given to the NHS at the moment, with the newspapers and television providing a constant barrage of stories which mostly seem to complain about lengthening waiting times and poor quality care.

Much of this coverage is probably exaggerated, yet there is no doubt that many A&E are struggling to cope with the twin pressures of rising demand from patients and an NHS budget which has been falling in real terms over the last few years. Recently, a new report which delved into the official statistics on A&E visits to hospitals in England has emphasised a particular source of pressure – the growing number of elderly patients caused by our ageing population – against which it appears they are struggling to cope.

The report in question was produced by an organisation called the Health and Social Care Information Centre under the title Focus on Accident and Emergency – December 2013. This was an attempt to bring together the multiple sources of data which are officially produced on A&E departments to present a coherent image of the situation in English hospitals. Trying to answer the question “Who goes to A&E?” was one of the report’s main themes.

In total, there were 22 million A&E attendances in 2012/13 compared with 340 million GP consultations, reflecting the fact that A&E departments are supposed to deal mainly with emergency medical situations when they arise rather than being a general first port of call for people who need medical help. There are two types of A&E departments in England: Type 1 (major) and Type 3 (minor), which are classified according to the types of medical emergencies which they are equipped to deal with.

As well as looking at the present situation, the report also uses historical data to make comparisons of how things have changed in recent years. One of their most striking findings is that the number of visits to Type 1 A&E departments has only risen by slightly more than the rate of overall population increase during the last eight years, but visits to Type 3 A&E departments have risen by eleven times the rate of population increase. In other words, many more people seem to be visiting minor A&E departments who were presumably using other methods to access the NHS in previous periods, perhaps such as visiting their GPs or receiving more care in the community. This increase partly explains why pressure on the system has been rising, and therefore why the problem of struggling A&E departments has been gaining additional media attention.

As mentioned above, the report also emphasises the role that growing numbers of older people have played in increasing the demand for A&E services. Overall, the elderly are not responsible for an enormous share of total A&E visits by themselves – most A&E attendances come either from very young children or people who are in their early 20s – but they are the age group among whom the highest proportion of people need A&E care each year: in 2012/13, for every 1000 people aged over 83, there were 500 A&E visits, a rate matched only by toddlers.

When they do visit A&E, people who are over the age of 70 are also significantly more likely to need major (Type 1) services than minor (Type 3) services, suggesting that their health needs are more complex. They are more likely to be suffering from multiple health problems at once, which, as BBC Health Correspondent Nick Triggle has argued, means they are more likely to be admitted to hospital than younger patients, and to spend longer in hospital once they get there. The report shows that a fifth of attendances at Type 1 A&E departments are now accounted for by the over-64s, an increase of more than two-and-a-half percent over the last four years.

This has had a profound impact on the ability of A&E departments to meet their waiting time targets. The NHS is supposed to keep the proportion of patients who wait for over four hours in A&E down below 5%, but last year this figure had risen to 6% across the major A&E departments, it appears partly because of the rising demand placed on the service by the additional elderly patients who suffer from complex conditions. The ageing of the population appears to be piling more and more pressure onto the system.

Can anything be done?

Earlier this year, a report by the National Audit Office (NAO) claimed that too many people are now being seen by A&E departments rather than going through other parts of the NHS to access healthcare services. Prof. Keith Willett, the director of acute episodes of care for NHS England, called in response for more care to take place outside of hospitals. Campaigners have long argued that as the population ages, much more will need to be done to take care of people suffering from multiple, long-term conditions in the community and in settings outside major hospitals, where they can be attended to in a way which uses up fewer resources, and by professionals who have an opportunity to deliver a better standard of care in a less pressurised environment.

Although progress towards this goal appears to have been slow so far, it was announced earlier this year that GPs would take on an extra role by acting as a personal care co-ordinator for their most frail elderly patients, which hopefully will be a step in the right direction. Ultimately, as the population ages, much more radical action will still be needed. Don’t expect the stream of negative media coverage of A&E departments to quieten down any time soon.