Using the debate over HS2 as a starting point, David Kingman wonders whether our method of measuring the value of major projects is fair to future generations 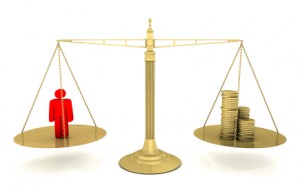 The controversy over whether Britain should invest in a second high-speed rail line (HS2) which would eventually link London to the Midlands and the North of England, continues to chug along. On 29 October, a new report from the government weakened the business case for the project by estimating that the amount of economic benefit the project will generate in return for every pound spent on its construction is slightly lower than previously thought, at £2.50 rather than £2.30.

At stake is a project which it has been estimated would ultimately cost £42.6 billion over the next couple of decades. A broad alliance of campaigning groups has sprung up to argue against the plan, which until recently enjoyed support from all three of the main political parties. Groups opposed to the plan include home-owning NIMBYs who are worried about the impact of the new line on property prices in previously picturesque areas, which has motivated the MPs who represent them to oppose it too; some transport groups say that the money could be better spent on other areas of Britain’s transport network, or more usefully spread across improvements to the network as a whole; some see it was a very expensive vanity project at the time of belt-tightening austerity; others raise concerns about the environmental impact. Now the Labour Party appears to be turning against the scheme, putting HS2’s future on shaky ground if Labour wins the next election.

However, HS2 still has powerful backers who are keen to see the project completed. At the same time as this new report weakened the business case for HS2, Network Rail produced their own study which argued that travellers will face years of disruption due to overcrowding if the scheme doesn’t go ahead; local politicians in many of the towns and cities along the project’s route are still thought to be in favour, while most importantly David Cameron recently argued at the CBI’s annual conference that opponents of HS2 are “putting our country’s future at risk.”

So which side is in the right here? Unfortunately, nobody can say for sure. But is this even the right question for us to be asking? Perhaps the most interesting thing that this furore over HS2 illuminates is the role played by cost-benefit analysis in determining whether major infrastructure projects get the go-ahead or not. As we shall see, this technique is hugely important, yet the way it is used at the moment is also highly technical and opaque – and it may have created a systematic bias which works against the interests of future generations.

The principle which underpins cost-benefit analysis is very simple. Important infrastructure projects are often hugely expensive; the government needs to have a way of calculating whether spending public money on a particular project is going to generate enough benefits for the rest of society to be worthwhile, not just in itself but also compared to other possible projects that same money could be used for. Cost-benefit analysis is supposed to provide a methodologically robust means of measuring all of the costs associated with a project as well as analysing all of the benefits, and then deciding whether it is worth doing. This has become an extremely influential approach to policy-making in many developed countries around the world, partly because it is supposed to be politically neutral – the evidence should be able to produce a clear verdict, taking political considerations out of the equation. However, in reality examples like HS2 show that the approach of doing cost-benefit analysis is far from perfect.

The biggest problem with cost-benefit analysis is that it is impossible to conduct an entirely neutral, evidence-based policy-making exercise, as Dan Durrant of UCL has argued. In reality, undertaking a cost-benefit analysis involves ascribing values (not only economic values, but also cultural and moral ones) to the importance of the different costs and benefits. This means that the same project could be analysed in different ways, which would produce different answers as to whether it was worth doing or not.

The BBC’s former economics editor Stephanie Flanders has argued that we need to remember some projects definitely provide a value which is almost impossible for economists to put a number on.

As cases like HS2 show, using cost-benefit analysis has not succeeded in de-politicising important infrastructure projects; on the contrary, the debates over the business case for building the new railway line, especially the issue of how much value we should ascribe to each hour that businesspeople have to spend stuck on trains, show that cost-benefit analysis often just creates new areas of disagreement as people argue that the costs and benefits have been over- or under-stated.

This is partly because there are a range of different methodological approaches to conducting a cost-benefit analysis which are likely to produce different results (see the BBC article below). Perhaps in future it would help to give these debates a broader picture if official projections were forced to include a range of different cost-benefit calculations, although this might just generate even more controversy.

One of the major drawbacks of cost-benefit analysis is that it has the potential to discriminate against future generations. This is because, as the old adage goes, economists are prone to knowing the cost of everything and the value of nothing. In debates over projects like HS2, it is relatively easy to come up with a big, scary number for what the cost will be, while it is must more difficult to say how much benefit it might generate over a very long timescale; this weights the debate in favour of the scheme’s opponents.

The BBC recently produced an article looking at the history of several major transport projects and how they have turned out compared to the initial cost-benefit analysis, including the Jubilee Line extension, the Channel Tunnel and HS1 (England’s first high-speed railway line, which links London to the Kent coast and Eurostar).

By and large, they all cost more than they were supposed to and failed to deliver all of the anticipated benefits, although they may have caused some additional boons which hadn’t been foreseen at the time. For example, HS1 may have triggered the urban regeneration of Ashford in Kent, while previously run-down areas along the Jubilee line have gentrified as a result of its extension. The point this emphasises is that the narrow framework of cost-benefit analysis can easily miss out parts of the bigger picture.

Another limitation is that cost-benefit analysis usually involves discounting the value of future benefits into today’s terms using a discount rate. This is a number which expresses, as a percentage, how much less valuable expected growth in the future is than growth we could enjoy today – and adjusting the discount rate is likely to lead to huge changes in how valuable a project appears to be. Because the arguments surrounding infrastructure projects inevitably tend to become politicised, opponents of these schemes are likely to argue in favour of using a higher discount rate so that the project appears to be less beneficial overall.

So what should we do about the limitations of cost-benefit analysis? Obviously this is a very difficult question. We need to have some means of working out whether a project represents a good use of public money or not, but at the same time we’ve seen how this can easily lead to more problems. What we definitely don’t need is for the debates surrounding infrastructure projects to be reduced to the kind of futile haggling between supporters and opponents over every single penny of cost-benefit analysis which has unfortunately characterised the HS2 debate. However, until we can come up with a better tool for measuring costs and benefits, this may be what we’re stuck with.