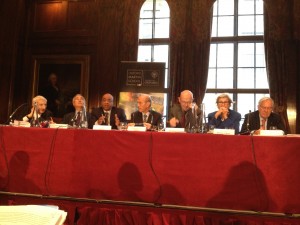 A team of world leaders formed the “Oxford Martin Commission for Future Generations” to report on obstacles to long-term thinking – and last week they published their report, entitled “Now for the Long Term”.

In the report, the Commission for Future Generations sets out how short-term preoccupations are increasingly creating an impasse in negotiations over climate, trade, security and economic affairs. The Commission claims in particular that institutional obstacles are stopping world leaders from doing enough to fight climate change.

At the launch, the Chair of the Commission, Pascal Lamy, argued that “democracy has been too short-term in the results it has produced – but it doesn’t need to be.”

The Oxford Martin Commission took on a very ambitious remit. Some of the audience at the launch were surprised that the Commission had been so wide-ranging and included solutions to youth unemployment as well as “conditionality” for international aid. (This is the idea, which Lord Nicholas Stern advocated, that some aid should be conditional on recipients helping younger and future generations by, for example, agreeing to send their children to school or having their babies vaccinated.)

One of the Oxford Martin Commission’s ideas is to have a larger group of countries (perhaps a G30) much more involved in international decision-making. They say that the institutions formed after the Second World War, which were well-suited to the challenges of that time, are now in need of radical reform. Pascal Lamy gave as an example the Security Council where India is unrepresented, and he suggests that each new UN body should have “sunset clauses” when it is set up – time limits creating the presumption that new institutions will be closed down after a certain time.  The Commissioners also want to “retire” some older international bodies.

Regarding the United Nations, Pascal Lamy said, “A High Commissioner for Future Generations is a good idea as long as it means increased visibility of the issues and less bureaucracy.”

“Now for the Long Term” came up with two specific information-related ideas – first, to create a better source of world statistics in “the cloud” (to be called World Stat), which would allow better measuring of how bad things are for younger and future generations; and second, to establish a world index to measure the long-term impact on future generations of measures taken today.

In responding to the ideas that the Oxford Martin Commission put forward, Jacob von Uexkull of the World Future Council suggested that the core issue with Climate Change was the need to abolish subsidies for fossil fuels. That is something that could be done immediately and would help future generations: it would be “Now for the Long Term”.

The Oxford Martin Commission was made up of many past leaders and a few current ones, but did not include any members of younger generations and was certainly weighted towards the “great and the good”.

That said, although the Oxford Martin Commission was based at Oxford it included members with backgrounds from many other universities and organisations and has used input from a wide variety of outside organisations including Wales’s Commissioner for Sustainable Futures (Peter Davies) and contributions from the World Future Council.

When members of the Oxford Martin Commission were challenged as to why their report wouldn’t just gather dust on shelves – as so many similar reports have done – they argued that its findings are very topical and much needed, and that people are fed up with lack of progress on climate change.

In order to stop its Future Generations report being ignored, members of the Commission will be presenting their ideas for change in a series of events across the world. And in case you are wondering, Pascal Lamy assured me that they would not be travelling unnecessarily, as most of them have to travel widely to capital cities anyway.