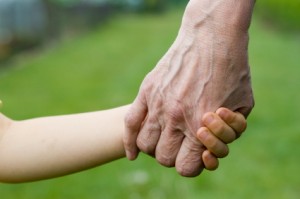 “My 11 year-old daughter wants a phone, but I’ve told her she’ll get one when she’s 14, like her older sister did. I’ve told her, ‘Your time will come.’ I hope when the time does come that I can afford it.”

Promises of this sort are common and they work as long as the players all believe that the rules of the game won’t change. The problems come where the recipients stop believing that these promises will be kept. Once that faith disappears, the game starts to look unfair and people complain bitterly or refuse to play.

Belief in the contract

At the heart of our society is a set of promises just like that one, sometimes called a social contract. This is an implicit agreement that younger people will pay into the system more than they get out of it on the basis that “their time will come” and that they in due course will be supported with pensions and healthcare and age-related benefits.

Recent developments have thrown into doubt whether these costs can be afforded in future: as the population becomes increasingly “top heavy”, it looks unlikely that the promise of similar treatment for a new generation of pensioners can be honoured. Slower economic growth even makes many of the current promises look too expensive in relation to what can reasonably be raised in taxes: the projections of the official Office of Budgetary Responsibility suggest that, even with optimistic assumptions about economic growth, the taxes on the young will have to rise significantly over the next 20 years if they are to pay for the spending that is envisaged.

There is another problem with asking young people to believe that “their time will come”: they have heard those words before and witnessed the promises being broken. They were told that if they worked hard and did well at school and university they would get a job, but for many young people now there is no job. They also know their parents received free university education but for them “their time did not come”: instead they must pay fees of £9,000 per year, with high interest rates on their loans and, in effect, a special 9% income tax when they graduate – if they get a job. In pensions, they know that most of their parents will receive final salary pensions but they themselves won’t: their time won’t come for such pensions but they are still required to pay heavily towards the final salary pensions of the older generation.

When they look at older people’s benefits such as bus passes, winter fuel payments and free prescriptions, they are pretty sure that these will have been removed within a few years – their time will not come for these benefits in future even though they are financing these for “the golden generation” of baby boomers.

So this is about more than just a poor economic outlook: it is about fairness between generations. If you do not believe that “your turn will come”, you will surely be justified in refusing to play the promises game.