A new report commissioned by the Labour Party has criticised Britain’s lack of preparedness for the future demands on our infrastructure. David Kingman explains 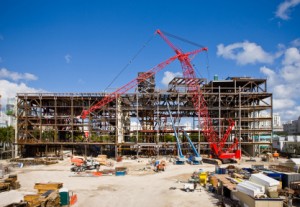 We all depend on infrastructure, wherever we live in Britain. From roads to railways, airports to air-conditioning, power stations to pipelines, we all depend upon an almost unseen network of supply-lines without which we couldn’t enjoy most of the comforts of modern life that we almost take for granted.

Few of us really stop to think about how water comes out of the taps into our homes, or why railway lines connect certain places and not others, but in reality none of our infrastructure got there by accident. Everything has been planned to try and ensure that these vital services can continue functioning without ordinary people having to think about them too much.

Infrastructure planning is clearly vital, and it is very much an intergenerational issue because infrastructure is usually designed to last for a long time. A well-designed infrastructure system is one of the most positive legacies one generation can bequeath to another; conversely, failure to plan adequately for the future can leave future generations at a severe disadvantage.

This is why we should be concerned about a new report commissioned by the Labour Party, which claims that Britain is experiencing an “infrastructure drift” because of a failure to plan for our future needs. How did we end up in this situation?

The Armitt Review of Infrastructure

The final report was fairly damning about a lack of a long-term planning in Britain’s infrastructure, placing particular emphasis on the cost of transport congestion (which could cost the economy £36 billion per annum by 2025), the lack of decision-making over building an aviation hub in the South East, the threat posed by electricity shortages – which could occur as soon as 2015 – because a fifth of the UK’s energy generating capacity is due to come offline within the next 10 years; and the fragilities in the UK water supply which have been exposed by droughts in 2011 and 2012.

To address all of these challenges, national infrastructure planning would require a much higher political status than it has at present, which is why the Armitt review recommends creating a new, politically-neutral, National Infrastructure Commission, whose job would be to undertake an evidence-based review of Britain’s infrastructure needs over the next 20–30 years each decade.

The findings of these reviews could then be delivered to Parliament, which would have to determine what should be done about them; the Commission could then monitor how effectively new infrastructure plans are being delivered, and continue to exert pressure on the politicians to take infrastructure planning more seriously.

According to the BBC, Sir John said:

“[Major infrastructure projects] are often controversial and politicians are rarely in office long enough to see the electoral dividends of major investment programmes… we have the Victorian pioneers to thank for the infrastructure that has underpinned the quality of life for our generation. It is up to us to lay the ground for the next pioneers who will create the innovative systems and services that will serve future generations.”

Supporters of the review within the Labour Party have endorsed its findings, while comparisons have been drawn with the successful delivery of the 2012 Olympic Games – one of the largest civil engineering projects ever undertaken in Britain – as an example of what can be achieved relatively quickly as long as the political will exists to support a project and see it through to its conclusion.

Unfortunately, the report seems to be correct in its diagnosis that the nature of the incentives for politicians militates against long-term planning. Large building projects are nearly always controversial in Britain – partly because of planning regulations – and few politicians are willing to risk their careers supporting unpopular schemes which will not deliver any benefits until years later, by which time they will probably be out of office.

In addition, the furore over HS2 has shown how easy it is to work out how much a large-scale project will cost to build, whereas it can be almost impossible to quantify the benefits which it might deliver in the future. It’s worth pointing out that many of the Victorian engineering schemes which the report praises incurred enormous financial losses at the time when they were built, and in today’s climate there seems to be less appetite for taking such risks.

Britain clearly needs to do something if future generations are to have the infrastructure they need. Our population is predicted to rise by over 10 million people during the next 20 years or so, yet there appears to be very little long-term planning directed towards preparing for this increase. Politicians will have to be braver than they are at the moment, it seems, if we don’t want future generations to be caught out.