UK Wealth is highly concentrated, lightly taxed and held by older people. This is the conclusion drawn by Angus Hanton in his review of the recently published Wealth in the UK: Distribution, Accumulation, and Policy (Oxford, 2013), written and edited by a number of leading academics at the London School of Economics 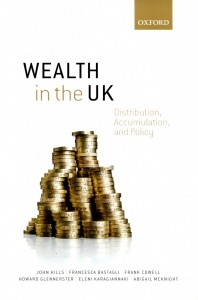 John Hills and his team have produced an excellent review on how UK wealth is distributed, how it was accumulated and what policy solutions there are to make its distribution more equal. They demonstrate the degree of wealth inequality, which is in sharp contrast to income inequality: if you take someone near the top and compare them with someone near the bottom (10th and 90th percentiles in the jargon) you find that those with top incomes get FOUR times as much as those near the bottom, whereas in asset terms the equivalent top people are SEVENTY-SEVEN times as wealthy as those near the bottom.

In some ways that’s not too surprising as those near the bottom will not be homeowners and those at the top will be owner-occupiers, but it does show how very unequally wealth is distributed in the UK. The book also shows how rapidly wealth has increased recently, with the median wealth of those aged 45 to 54 increasing from £73,000 to £190,000 in just 10 years up to 2005 – and it will certainly have increased very significantly since then as a result of house price rises. These increases will have been much more pronounced in the older generation who are more likely to be homeowners and who will also, on average, have more valuable houses.

In terms of the entrenchment of wealth, Abigail Knight and Eleni Karagiannaki have written a great chapter on how parental wealth predicts future advantage, and this is not just through inheritance and lifetime gifts but strongly through educational outcomes. The three factors that have most influence on whether an individual attains degree level education are the parents’ educational attainment (especially the mother’s), the income of the family and the wealth of the family. This wealth effect is illustrated by the fact that if you look at someone whose parents are half way down the wealth scale they are 32% more likely to gain a first degree than someone whose parents are three quarters of the way down the wealth scale. Similarly, increases in wealth strongly increase the chances of employment and good health, particularly for the younger age groups, so wealth really matters beyond the simple pleasure of having the stuff!

The heavyweight parts of Wealth in the UK are the reviews of public policy and taxation of wealth. In assessing successive government policies on wealth taxation since 1601, Howard Glennerster shows that the British have been very inconsistent and have followed two quite different strands of thinking on wealth distribution: the efficiency case and the moral/radical case. The efficiency case argues that wealth should be unrestricted because it puts production in the hands of those who use it most productively; it incentivises both innovation and risk-taking; it encourages people to build up assets for their children; and it restricts the state’s monopolising of employment. The moral case, or more radical tradition towards wealth, emphasises that wealth brings power and should therefore not be allowed to become too concentrated; that people have a right to an equal start in life (which wealth distorts); and that taxation should fall on those who have the greatest capacity to pay. It was these more radical views of UK wealth holding that led to inheritance tax and long-running debate about an annual wealth tax.

The most surprising point that Hills and Glennerster make is that wealth taxes have in fact decreased sharply in recent decades from what many already considered a low base. They take wealth taxes to be Inheritance Tax, Capital Gains Tax and Stamp Duties, and they show that in 1949 these represented 2% of GDP but by 2011 these wealth taxes were only bringing in about 1% of GDP. In other words over the last 60 years, whilst personal wealth has increased dramatically, taxes on this wealth have virtually been cut in half.

The reason is that housing and pensions represent the bulk of this wealth and they have been given privileged treatment: owner-occupied housing is virtually tax free, with no tax on gains from selling and no tax on the imputed benefit of living in the house, while pension saving is even better than tax free – tax subsidies add to the return on this form of wealth accumulation. Holdings of other assets such as stocks and shares are also very lightly taxed because of the exemptions and the low rate of Capital Gains Tax, whilst many other forms of savings, such as ISAs, are exempt from tax. At a time when the older generation have both more housing assets and more pension reserves, these large exemptions from wealth tax are heavily advantageous to the older generation.

The huge wealth disparities in the UK are a concern for all policy-makers, with the bottom 10% of the population having less than £13,000 on average and the top 10% having average assets of over £1,000,000. Although some other countries have similar disparities (such as the USA, Sweden and Canada) the UK’s relative poverty means that these differences between rich and poor create more problems in the UK. So whilst the writers of this book, as well as many policy-makers, would clearly like to reduce the inequality of UK wealth distribution through the tax system, it may be currently be considered “politically impossible”. Even modest changes – such as updating Council Tax valuations or making the Council Tax banding more proportional to house values – are unlikely to be adopted until the extent of the inequalities is more widely understood.

As people start to realise how much of the tax burden is borne by the younger generation they may reject of the very light taxation of UK wealth.

A summary of the book can be found here: