Matt Hitchens examines whether innovation could have a dark side… 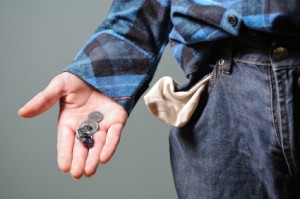 “Technology… is a queer thing. It brings you great gifts with one hand, and it stabs you in the back with the other.” CW Snow

There is a worrying trend developing in the USA: since 2000, productivity, which previously had (mostly) grown hand-in-hand with employment, left it behind, continuing to increase as employment stagnated (as well-cited figures from the Bureau of National Statistics show). There are several suggestions as to why this happened, including reasons to do with global trade, or with the financial crises of the early and late 2000s – but an interesting alternative theory suggests that technology itself, that great driver of growth for the last 200 years, is to blame.

Where have all the jobs gone?

Throughout the history of industrialisation, jobs have always been made redundant by technology – the first were the British artisans, forced out of their production jobs by the advent of the factory. Then came the weavers, and the miners, and the candlestick-makers; all sorts of professions have fallen victim to the relentless march of technology. But this has always, in economic terms, been seen as a good thing: though there has been a painful transition as workers retrain, new jobs have always been created eventually, and the job market has sorted itself out.

But over the last ten years this doesn’t seem to have happened. Americans have been inventing, innovating and improving efficiency at ever higher rates, but the jobs which normally come with such change just haven’t materialised. This may have profound consequences.

David Autor, an economist at MIT, has argued that this will inevitably lead to an increasing “polarisation” of society, as middle class jobs become obsolete and what remains is either highly skilled or unskilled labour. This could profoundly change the face of our society; and such a change to the fundamental structure of the labour market wouldn’t necessarily show up in simple measures of the number of people who are unemployed.

Who took my job?

Erik Brynjolfsson and Andrew McAfee, also from MIT, have put forward a thesis, in their 2011 book Race Against the Machine, which argues that improvements in technology are directly linked with falling employment. They say that these technologies, though beneficial for the economy overall, have caused “The Great Decoupling”, whereby technological gains no longer leads to employment gains.

Of course, some version of this argument has been around for centuries, starting with the Luddites in England who thought that machines were stealing their jobs. It has long been dismissed as a fallacy, as economic history consistently shows jobs recovering, even though the transition is often long and painful, as displaced workers retrain into other professions, and as the technology itself produces new avenues of employment (just think of the internet). But history serves as, at best, a rough guide to the future; just because something has never happened doesn’t mean it can’t. Induction from the past is a useful tool, but is not foolproof; and as Nassim Nicholas Taleb’s Black Swans persuasively argued, just because technology has solved the problems of the past, doesn’t necessarily mean it will solve the problems of the future.

So the ideas of Brynjolfsson and McAfee shouldn’t be dismissed lightly. After all, this is a very big problem that they are trying to explain.

The future of employment

Economic history is against them; it seems unlikely that modern, current technologies will stifle jobs in ways that no other technologies have done. But should we even be wary? If technology means we no longer need to communicate by messenger or take a boat to Australia, could that not be a good thing?

Taking an intergenerational perspective, could it be a good thing if future generations no longer have to sweep the streets, clean sewers or (as Google is attempting) even drive cars? It is not obvious that more work is always to our benefit – everyone needs purpose in their lives, but do we need 100 hour weeks? Is underemployment a static concept, or should it be adjusted to our needs?

But is the current capitalist model the best one to cope with this? Even in the recent past, like the 1970s, it was thought that technology could allow everyone to work less and enjoy more leisure without any significant loss of income or living standards. But that model depended on sharing the remaining workload, and not permitting market forces to drive down prices (and hence incomes). This clearly is not happening, and we do not have political structures – or at least acceptable ones – to bring such a utopian vision to fruition. Instead, technology is leading to a “drive to the bottom”.

Coming from the other side, it is quite possible that technological growth is not, as is often assumed, limitless. The productivity explosion we have seen over the past 200 years has been driven by technology, yes, but also by population explosions, increased use of non-renewable resources and by massively increasing government debt. It is up to current and future generations to decide whether consistent compound growth is desirable, or even possible, given the costs it imposes on the world around us.

As current citizens, we have a responsibility to younger and future generations: a responsibility to ensure that the world they are born into is not significantly worse than ours. That means we need to look hard at the current model of technological growth, and consider whether the Luddite position may have some merit overall. But the debate needs to be reframed, not in terms of unemployment but in terms of leisure. If improving technology means our children will not have to work as hard as us, is that a bad thing? Or is that something to celebrate?