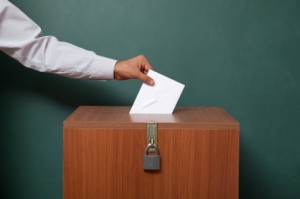 Does forcing people to vote strengthen or weaken democracy? That is one of the key issues at stake in the debate which has followed a recent proposal from the Institute for Public Policy Research (IPPR), who have argued that young people should be compelled to vote by law in order to address the democratic deficit which exists between the generations.

Force young people to vote at their first election

As it stands, the IPPR’s proposal looks straightforward enough. We have a significant problem with low voter turnout among younger age cohorts in Britain, which they think could be remedied by making it illegal for members of the electorate to abstain from voting in the first election when they are eligible to vote.

The IPPR suggests that a small fine should be levied on young people who fail to comply with this new law. What about young people who genuinely have no political preference between the different candidates? The think tank suggests that a “none of the above” option should be added to the ballot paper, so that nobody is forced to choose one of the parties simply because they have to cast a vote.

The problem of political apathy among younger members of the electorate has been building for some time. In the 2013 local elections, fewer than a third (32%) of eligible voters aged 18–24 actually cast their ballots, compared with almost three-quarters (72%) of the over-65s. The IPPR argues that there is evidence to suggest that someone who casts a vote in the first election for which they are eligible is more likely to vote in subsequent elections, so they think that their proposal could nudge younger people into the habit of voting more regularly.

They argue that improving the levels of voter turnout among young people would strengthen British democracy, as at the moment the UK has one of the largest gaps of any European country for turnout levels between younger and older voters. The IPPR argues that this has political and economic consequences for young people, who politicians are less worried about upsetting because they don’t expect them to vote. They have calculated that people aged 16–24 have suffered the effects of spending cuts during the current parliament which are equivalent to 28% of their annual household income, compared to 10% for those aged 55–74.

The imbalance in political power between the generations is a theme which some of IF’s own work has examined, notably our study launched in April 2012 called The Rise of Gerontocracy? Addressing the intergenerational democratic deficit, written by Dr Craig Berry.

Should people be forced to vote?

The IPPR’s plan appears to have plenty to recommend it. Unlike the suggestion which gets proposed more often for addressing the democratic deficit between young and old – lowering the voting age to 16 – this plan ought to genuinely lead to more young people actually voting, rather than simply being eligible for a vote which they may end up using. Ideally, it would lead to an increased focus upon helping young people to understand politics while they are still at school (perhaps as part of citizenship classes), as there would be an increased impetus towards equipping young people to use their compulsory vote as fruitfully as possible. As the IPPR themselves have suggested, the law already forces young people to do a number of things which are seen as being beneficial to them, such as attending school, so forcing them to vote as a one-off would hardly be a great additional burden.

There are also some other countries where it is already against the law to abstain from voting, notably Australia, so this policy would be far from exceptional in international terms.

However, the biggest problem with this policy is that forcing people to vote is arguably incompatible with democracy. Democracy can mean different things to different people, but if we agree that it broadly refers to a system in which citizens are free to express whatever political beliefs they wish without them being trampled on by other people, then surely part of this is that everyone has a right not to express any political beliefs? Arguably, we have no right to tell people that they should be politically engaged, as it is their democratic right not to be.

Putting aside this significant difficulty, it is also debateable whether forcing young people to vote in their first election would actually turn them into voters in the longer-term. It may be that people who vote in their first election today are more likely to become regular voters partly because it is only the most politically engaged young people who are willing to do this, and forcing large numbers of politically apathetic first-time voters to participate in democracy will lead to this causal relationship disappearing.

Lastly, it seems doubtful that too many politicians would want to change the status quo, as increasing turnout levels among younger voters could potentially shift the electoral arithmetic in plenty of seats where the incumbents would prefer this not to happen. For the moment, politicians appear to be happier engaging with older voters, who are more likely to use the established channels such as belonging to parties and local party associations, rather than trying to understand how they can communicate with younger voters.

All in all, it sounds as if this suggestion would face many barriers if a politician tried to implement it. This is a shame, because something definitely needs to be done if we want young people to make their voices heard in British democracy, and this policy sounds like one of the best ways of achieving this that anyone has come up with so far.