The Intergenerational Foundation, in conjunction with the New Statesman, has just launched its Schools Essay Competition.  IF Volunteer Jonathan Hughes explores the duties and obligations between generations 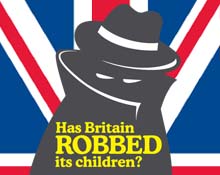 The birth of Prince George is a pertinent reminder to both Prince Charles and to the nation that we have a duty to leave the planet as we found it, as parents and as grandparents. Prince Charles considers climate change sceptics to be turning the earth into a “dying patient.” IF believes that we have the same duty to not only be stewards towards our environment but to be stewards towards our children and grandchildren too.

We are often accused of allowing our children to inherit a polluted world, because of our unsustainable lifestyles – though this is just one aspect of our legacy. The example of Private Finance Initiatives (PFIs) demonstrates how we are also guilty of placing a heavy financial burden on the shoulders of future generations as well.

PFIs are a type of long-term debt which enables the public sector to finance new infrastructure projects while spreading the costs out over a long period, usually 25 to 30 years. This enables them to build installations such as schools and hospitals without having to find the money up front, but it entails “kicking the can down the road” so that people in the future end up paying for the costs of these projects instead. This is bad for future generations, especially given that the infrastructure which has been built will often be obsolete before the PFI deal has been fully paid off, meaning it will end up being paid for by a generation that did not have the benefit of using it.

Young people clearly need to have a bigger say in how our country is run. The political elite have an obligation to reach out to younger generations and not just focus on the age groups which are more likely to vote. Perhaps you think the political system needs to be reformed by those currently in power? If you think the first-past-the-post system of electing MPs suppresses voter turnout and leaves voters disenchanted with a choice of very few political parties, does this deny you a say in our democracy?

Perhaps you have something personal to add – anxieties about the prospect of not being able to find a job, worrying about whether you will be able to afford housing, or concerns about being burdened with high student debts?

So, IF asks, has Britain robbed its children? We want you, A-level students, to give us your experiences. Do you feel robbed? Do you feel disenfranchised?

All the other details about the IF Essay Competition – plus fact sheets about key issues to help you on your way – can be found here:  http://www.if.org.uk/essaycompetition