A new report has shown how widespread the use of “zero-hours” contracts has become among the UK workforce. David Kingman explains… 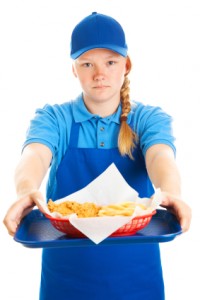 Imagine you’re an unemployed young person who wants to get an entry-level job somewhere in the service industry, so that you can try to provide a better life for you and your family by working your way up the career ladder.

This may seem like a perfectly reasonable ambition, but unfortunately you may well now find there’s a catch: so-called “zero hours” contracts have become widespread throughout the service industry, making it much harder for someone to build up a career doing these kind of jobs. Recent research by the Chartered Institute of Personnel and Development (CIPD) has shown just how far the use of these types of contracts has progressed.

No guarantee of work

According to the CIPD study, there could be up to a million workers in Britain who are employed using one of these contracts. An investigation by the Office for National Statistics produced a lower figure of 250,000, but the difference is probably explained by the two organisations using different definitions, and also because many employers and employees may not be familiar with the term “zero-hours contract”, even if it provides an accurate description of the arrangements under which they operate.

They are especially prevalent in service industries such as restaurants and retail, as well as in parts of the education, charity and social care professions.

A zero-hours contract is an employment arrangement where the employee receives no fixed hours from whoever is employing them; instead, the worker is paid by the hour and is simply offered shifts whenever the employer needs them, often at short-notice.

Zero-hours contracts are supposed to deliver benefits for both parties. For the employer, it eliminates their fixed labour costs, meaning they don’t have to pay employees to work when there is no demand for their services, and they have people waiting to be drafted-in at short notice should demand suddenly increase. For the employee, it enables them to be flexible about when they can work without the burden of being tethered to a fixed set of hours each week, so it is good for workers who have other commitments which take up a lot of their time, such as studying or looking at children.

Of course, there is also a significant downside for employees too. People who don’t have other commitments, who are trying to earn a full-time living from working in the industries where zero-hours arrangements have become commonplace, may now be finding that their earnings have significantly reduced because they can no longer be paid for doing a full day’s work if their employer doesn’t want them to.

As zero-hours workers effectively need to be ready to go to work most of the time if their employer suddenly offers them shifts, in a sense they get the downside of having the commitment of a full-time job without being given the same level of commitment – or the money which is supposed to accompany it – by their employer. As zero-hours workers are not full-time members of staff, they are also less likely to enjoy any job security or be offered other job benefits, such as paid sick-leave, holidays or membership of a pension scheme.

A recent BBC article on zero-hours contracts collected personal testimonials from a range of people who are employed in this way. The biggest problem they tended to report was the unpredictability of whether they would be offered shifts or not, which means their incomes can fluctuate wildly from month to month, giving them problems with basic outgoings such as rent and food, and they can find it very difficult to make any kind of long-term plans, such as saving up to buy a house.

Should zero-hours contracts be allowed?

The CIPD study showed that it tends to be workers at opposite ends of the age scale – those aged 18–24 or 55+ – who are most likely to be employed using zero-hours contracts. It ought to be emphasised that these arrangements are not necessarily exploitative per se – around 25% of people employed by them are thought to be students, who have a definite need for more flexible working arrangements – but as these are also two of the age groups in which people who are unemployed find things toughest in the jobs market, there’s a danger that people may be more vulnerable to exploitation through zero-hours deals simply because it’s so hard for them to find a job elsewhere.

Zero-hours contracts appear to work best when the employee wants flexibility, and the employer is able to predict and communicate schedules some days, perhaps even a week or more, in advance.

The broad spectrum of different types of people who are employed using zero-hours contracts is part of what makes it hard to define the appropriate policy response towards them. Depending on your point of view, you could view them either as the perfect answer for people who need a source of income but have too many other commitments to manage traditional working hours; or they could be seen as the latest attempt at stripping away hard-won employment rights – such as freedom from exploitation, regular hours and regular pay – that everyone should be able to expect at work as part of belonging to a civilised modern society.

Whatever your view, it appears that zero-hours contracts are here to stay for the foreseeable future, and young people who want to find jobs in the service industry will simply have no option but to accept them if the alternative is being unemployed. But it should be possible to organise a code of conduct to ensure that employers using such contracts at least do so fairly.