David Kingman ponders whether we can ever claim to know what future generations will want, using the Alaskan mining industry as an example 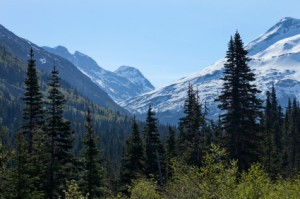 If someone asks you to imagine Alaska you might well picture a vast unspoilt wilderness of snowy forests and valleys, perhaps expecting it to be one of the last few places on Earth where animals such as wolves and polar bears can roam freely without having to navigate the myriad dangers posed by humans.

In part this image would still be correct. However, Alaska is also increasingly being imagined as a potential goldmine, owing to its vast reserves of valuable oil, gas, metals and minerals, the exploitation of which threatens to bring both the region’s abundant wildlife and its indigenous inhabitants into conflict with the demand that modern society has for resources.

Alaskans are currently trying to decide on the future of one of the most ambitious resource exploitation projects yet: a major new copper and gold mine which could cause irreversible damage to the natural environment and the lives of the thousands of people who depend upon it for their livelihoods. This debate also raises a number of questions about intergenerational justice, which this article will explore.

On one level this is primarily a story about the conflict between two of Alaska’s most significant industries, both of which depend on the fruits of the natural environment for their success.

The first of these industries is mining. According to the state’s Resource Development Council, the mining industry in Alaska (which includes zinc, lead, copper, gold, silver, coal, as well as construction minerals such as sand, gravel, and rock) was worth almost $3 billion a year in 2012 and is responsible for at least 9,500 jobs. Many of these are in remote areas of the sparsely-populated state, creating livelihoods for people who often don’t have too many other options because of a lack of alternative sources of employment.

The second industry is salmon fishing. Alaska is home to the largest and most bountiful salmon fishery in the world. In 2010 Alaska’s commercial fishermen harvested a total of 168.6 million salmon, a catch worth more than half a billion dollars in total. Although an exact estimate of the number of people who work in salmon fishing is hard to come by (much of the work is part-time or seasonal), it has been suggested that the fishing industry in total (including species other than salmon as well) accounts for more than 50% of the private sector employment in coastal areas, and fish processing is responsible for over 70% of Alaska’s manufacturing jobs.

Fishing also provides livelihoods to many of Alaska’s indigenous peoples, who still fish using traditional methods, while it also attracts many tourists to the state each year.

These industries are clearly both vital to Alaska’s economic well being. The project which has brought them into conflict is the campaign launched by the Pebble mining company (a subsidiary of British mining conglomerate Anglo American) to dig one of the world’s largest copper and gold mines in the upper reaches of the Bristol Bay catchment area.

Proponents of this scheme argue that it will enable the local population to share in the mining boom which has benefited other parts of the state, creating hundreds of new jobs and injecting a large amount of money into the local economy. On the other hand, critics argue that the creation of large reservoirs containing billions of tons of toxic waste materials – a by-product of the new mine – will wreck the local environment and risks leaching harmful chemicals into the nearby Kvichak Estuary, a vital site for salmon spawning. According to the “Save Bristol Bay” campaign, the mine would produce between 2.5 billion and 10 billion tonnes of acid-generating waste during its lifetime which would require environmental management in perpetuity. Locals have protested against the proposed mine because of their concern over the perceived threat to their environment.

A recent article from the BBC showed how far apart the two sides are on what they anticipate the impacts of the new mine will be. John Shively, the boss of the Pebble mining company (also known as Pebble Partnership), was keen to stress the scheme’s economic benefits:

“If I thought this mine would poison the water, and harm the fishery do you think I’d be here? This mine will give the local tribes what they really need. Jobs and the chance of a better life.”

However, a local member of one of the indigenous communities, Kim Williams, emphasised that protecting the salmon has to remain her number one priority:

“The salmon is our source of life. We cannot put it at risk.”

What does all this have to do with future generations?

As explained above, both mining and fishing rely on taking resources from the natural environment. If handled badly, either is capable of leaving future generations with a worse environment then the one we inherited from our ancestors.

Unsurprisingly given how much its whole economy is reliant upon the natural environment, Alaska is acutely sensitive to the need to exploit its resources in a sustainable fashion.  The state’s Resource Development Council has the official motto “Growing Alaska through responsible resource development”, and there has been a strong environmental protest movement ever since the major disaster of the Exxon Valdez oil spill in 1989, in which somewhere between a quarter of a million and three quarters of a million barrels of crude oil were washed into Prince William Sound.

The fishing industry is a notable example of sustainable management in action. Alaska has a fish management team who monitor the levels of salmon stock each year; if the numbers reaching the spawning grounds appear to be declining then they have the power to suspend fishing permits for the commercial fleets, hobbyists and indigenous tribes alike. Ensuring the future sustainability of the fish stocks for future generations is always placed ahead of today’s interests on their list of priorities.

By its very nature, mining is more difficult to manage sustainably, for the simple reason that the valuable substances being removed from the ground do not replenish themselves naturally. Therefore, if mining is handled badly it is possible to create a situation in which today’s Alaskans get to enjoy a one-off bonanza fuelled by the growth that mining brings, leaving a toxic mess behind which future generations will have to clean up.

This is the worst case scenario, although – as the boss of the Pebble Partnership argued – building this mine could also deliver a tremendous boost of prosperity which enables future generations to enjoy a better standard of life than they could have done without it. Although it instinctively feels more in keeping with our duty of stewardship to hand future generations a natural environment which has remained intact, this is not necessarily the outcome which will deliver the best results for them in the long run.

However this dispute in Alaska is eventually resolved, it needs to be remembered that this is as much about balancing the interests of the current generation with those who will come after them in the future, as it is about the choosing between the priorities of the miners, fishermen and Alaska’s indigenous inhabitants today.