What lessons could Detroit’s municipal bankruptcy, the largest ever in US history, hold for British policy-makers? David Kingman reflects… 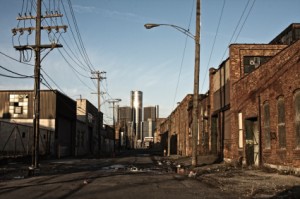 The American city of Detroit made history on 19 July when it became the largest US city ever to file for municipal bankruptcy. The move had been predicted for some time, as Detroit has been struggling for years with the insidious effects of economic bust and urban decline, while the city was under particular pressure because of its huge liabilities to provide pensions and healthcare for retired public sector workers.

Now that Detroit has finally taken this plunge, many other municipalities are watching with interest as the city tries to reach a new settlement with its labour unions and pension schemes over what proportion of these liabilities it is still duty-bound to honour.

So did the city get into this position in the first place? And what lessons might this hold for British policy-makers?

“Motor City” gets a flat tyre

In many ways, Detroit’s predicament mirrors similar narratives of post-industrial urban decline which have been played out across the rest of the USA and in other developed countries, including Britain. During the 20th century, Detroit was famously branded the “Motor City” (or “Motown”) because of the key role which it played as the centre of America’s car manufacturing industry.

The three great names in the American automobile industry – Ford, General Motors and Chrysler – all became established in Detroit during the early decades of the 20th century, and by the 1950s the city was responsible for virtually the whole of America’s car production, during an era when rising incomes and the growth of suburban living led to a growing demand for new cars. However, for a variety of reasons – including poor labour relations, the development of foreign competition and the oil shocks of the 1970s – the car industry started to decline, leading to a fall in Detroit’s fortunes.

As jobs began to disappear, so did the population: at its peak in the mid-1950s Detroit was home to 1.8 million people, but this has now declined to a mere 700,000, spread out over an unwieldy urban sprawl that stretches across 140 square miles, almost a third of which is either vacant or derelict.

As the tax base has shrunk, public services have slowly collapsed, while crime has risen. The city recorded 411 murders in 2012, giving them a murder rate eleven times higher than the US average. This compares to just 550 across the whole of England and Wales during the same time period, which has over 80 times as many people.

However, the big long-term problems facing Detroit relate to pensions and healthcare benefits for retired former public servants. The city’s long-term debts are estimated to be $18.2 billion, of which over half is in unfunded retirement benefits. By declaring bankruptcy, the city is hoping that the federal bankruptcy judge will enable the city to reduce these to a level it can afford to pay.

Lessons for the UK

As The Economist has noted in its coverage of the events in Detroit, the problem of unfunded retirement benefits extends far beyond the city’s boundaries. Across America, municipal authorities have been guilty for years of trying to placate public sector unions by offering them pension and healthcare benefits which were much more generous then they could really afford, to be paid for by future generations of taxpayers who couldn’t have any say in these decisions.

According to recent estimates, the gap between funding and liabilities for state pension funds alone could amount to $2.7 trillion, or 17% of America’s GDP. One of the tricks which the states have used to make the situation look rosier than it is has been using an unrealistically high discount rate (an accounting tool for measuring the value of future liabilities in today’s money), which has enabled them to get away with paying less into their employee pension funds. Many have used rates of over 7.5%, even though – because of the current low rates of return – these funds could only expect to earn around 1% a year if they were invested.

Another Economist article demonstrated the range of tricks that public sector workers have been able to get away with in order to increase their incomes in retirement. These include “spiking”, the practise of promoting people during their last couple of years of employment so they have a higher final salary (on which their pension is then calculated), and “double-dipping”: retiring on a high public sector pension and being rehired by your old employer as a consultant. The evidence suggests that some public sector workers enjoy startlingly high pensions as a result; for example, California is apparently home to over 20,000 former public sector workers who receive at least $100,000 per year.

As in the UK, these pensions are in stark contrast to the type of schemes available to the majority of workers in the private sector. Less than 20% of American private sector workers still have access to a final salary pension scheme, yet they remain widespread in the public sector – and when the true cost of these schemes comes home to roost, everybody suffers, as the mess in Detroit has revealed. Many other US cities are expected to be grappling with similar problems over the coming years, as their populations age and it gets harder and harder for them to provide such a high level of benefits.

So what are the lessons for the UK? Firstly, the UK government should be honest about using a realistic discount rate to account for its public sector pension obligations, so we can see what the costs of these is likely to be in the future. Second, they should look into problems such as “spiking” and “double-dipping” to see to what extent they are an issue for the British system, and try to find ways of preventing them. Thirdly, pension promises should be adjusted so that public sector workers are not given a significantly more generous deal than that available to private sector taxpayers, without whom the system could not function.

Public sector pensions remain a contentious political issue on both sides of the pond. As the gap between what people were promised and what we can actually afford to pay them continues to grow, this is only going to get worse over the next few years.