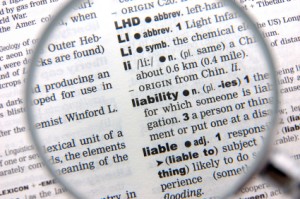 The issue of economic liabilities is extremely important to future generations. The contractual promises which we have made to pay people sums of money in the future deserve to receive much more attention and debate than they do at present.

Yet there appears to be widespread confusion about what liabilities actually are, how they work and what they mean in practice. This lack of knowledge is evident in both surveys of the general public and in the national media.

To take just one example, the Daily Telegraph recently presented an alarming story about the scale of the long-term financial liabilities which are being built up within the NHS as a result of court settlements in medical negligence cases.

The following quote is taken from this article:

“A total of £22.7 billion – nearly one fifth of the health service’s annual budget – has had to be set aside to pay compensation to thousands of people harmed by poor care. Experts last night said the scale of the liabilities facing the NHS was “jaw-dropping” with English damages now among the highest in the world… The new figures from the NHS Litigation Authority show that the service has put aside £22.7 billion for liabilities – a rise of 22 per cent in just one year, and almost doubled in five years.”

At first glance this sounds very worrying – both in the sense that enough people are being harmed by poor NHS care for this to be such a big issue, and in the sense that we will have to foot such a large bill for these medical negligence payments.

However, if you examine the facts then the story isn’t actually anywhere near as frightening as it first appears. Misleadingly, the figure of £22.7 billion is made to sound as though it is all one big bill which the NHS has to pay at once, when in fact the article goes on to explain that this is the value of the long-term liability for compensation payments to patients, which includes estimated payouts in the future for currently unresolved cases that have been brought against the NHS which it expects to lose.

That £22.7 billion is the value of the liability – in other words, the promise – to pay these compensation fees, over the course of their lives, to patients who’ve suffered negligence, notionally expressed in today’s money. As this money will be being paid out over a period of many years, a financial device called a “discount rate” has to be used to express what this would be worth in today’s terms. The more generous the discount rate, the smaller the cost in today’s money appears to be, even though this does not mean that the liability has necessarily become any smaller.

If the courts rule in favour of the patients in any of these cases (or the NHS agrees to settle with them out of court), what usually happens is that the victims are awarded a set level of payment every year for the rest of their lives. This is intended to provide them with a decent quality of life and compensate them for lost earnings and any other negative consequences which they might be suffering.

This article also repeats the common mistake of suggesting that the money has been “set aside” to pay for these liabilities. In truth, this is not the case. Medical negligence liabilities are actually paid on an unfunded (pay-as-you-go) basis whereby every year the NHS litigation authority (the body in charge of negligence lawsuits) collects a levy from every NHS trust in the country (paid out of their operating budgets), which is used to settle that year’s payments.

This is why equating, as this article does, the total liabilities during the lifetime of all the people who’ve been awarded damages to the total NHS operating budget in a given year is misleading, because this doesn’t reflect how these promises will actually be paid for.

Unfortunately, it isn’t only the media who routinely demonstrate a lack of understanding about liabilities. According to some research done in 2011, just 14% of people polled understood the difference between the debt and the deficit.

There is, however, an important distinction: the debt is a liability, because it entails a promise to repay the money which has been borrowed, whereas the deficit is the gap between the government’s current income and expenditure, which is what governs how much the debt increases by each year.

Last year the Centre for Policy Studies published a research report entitled A Distorted Debate which presented numerous examples of how people who might have been expected to have known better have made public speeches in which they have been guilty of confusing the debt and the deficit. This has included the current leaders of all three of the major political parties, the current Chancellor of the Exchequer, and Gordon Brown, who served as both Prime Minister and as Chancellor during his career.

A large number of quotes were also given taken from articles by prominent journalists who made the same mistake, including Nick Robinson, Max Hastings and Tony Parsons. If people who sit right at the top of Britain’s politics and media don’t succeed in getting this right, can we really expect the general public to?