The UK has endured years of punishing austerity – but might the Government have to cut back even further? David Kingman explains. 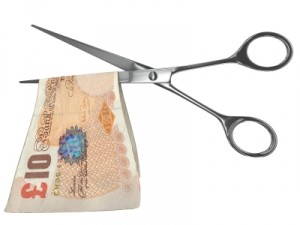 It seems fair to say that by almost any measure, the UK’s deficit reduction strategy has not proved popular with voters. Ever since coming to power in 2010, Chancellor George Osborne has made slashing public spending the dominant theme of his economic strategy, leading to a widespread frustration with austerity among the general public, which is surely part of the reason why the Conservatives now lag behind Labour by 10 points, according to  recent opinion polls.

The outgoing Governor of the Bank of England, Sir Mervyn King, is alleged to have warned before the country went to the polls just over three years ago that whoever won that election would need to make such deep cuts to public spending that they would be rendered unelectable for a generation, and there seems to a be a genuine possibility that his prediction could come true

Whether austerity is good for future generations or not appears to be a question with no right or wrong answer. On the one hand, attempting to get Britain’s national debt – officially measured at £1.2 trillion in April 2013 – under control will leave a better inheritance for future generations. If they played no part in creating this debt mountain, then surely they shouldn’t have to bear the burden of repaying it?

On the other hand, there is certainly an argument that cutting expenditure too quickly, or cutting it in the wrong ways – such as cancelling infrastructure projects and other forms of productive investment – will leave future generations worse off anyway. Either way, its difficult to paint a rosy future for them, unless the British economy finds some powerful new engine of growth to drag it out from its current malaise.

However, a new report from the Bank for International Settlements (BIS), in effect the central bank for central banks, has just added a new concern to this debate. Has the British Government used its opportunity to make public spending cuts wisely? And could even deeper, more drastic cuts be in store for us?

The report, Making the most of borrowed time: repair and reform the only way to growth, argues that governments around the world have made a significant achievement in preventing the world from falling into another major financial crisis, or a prolonged economic depression. Yet this is largely where the praise stops. They also argue that central banks across the Western world (especially in the USA and Britain) have been using quantitative easing (QE) – essentially, printing money to purchase assets – as a means of pumping additional stimulus into their economies, buying some extra time and creating a slightly more favourable environment for the governments involved to repair their balance sheets.

QE cannot be pursued forever without causing substantial economic distortions. For one thing, increasing the monetary supply degrades the value of earned income, making it bad for the working-age population as whole. A broader impact is that it increases inflation. These negative effects mean that it can only ever be a temporary measure. As a recent article from the BBC emphasises, there is also the strong possibility that unwinding QE will cause such severe market shocks that another financial crisis is not out of the question.

The report from BIS argues that this means QE only provided a temporary respite for governments to act without the full negative impact of public spending costs being felt within the economy. They argue that Western governments have not fully taken advantage of this opportunity, with the result that even more painful cuts might be on the way in future.

Try getting elected after doing this…

The report is especially negative about the UK. Although the Coalition’s austerity measures have managed to shrink the deficit (the annual gap between income and expenditure) from 7.6% of GDP in 2009 to 4.3% of GDP in 2013, the total level of indebtedness (which includes corporate, individual and government debt) has risen by over 60% since 2007, largely because of rising government debt.

The decline in Britain’s deficit has also been smaller than in almost any of the other highly-indebted Western nations, including Greece, Spain, Italy and the USA. The UK’s overall public debt is still above 100% of GDP, and to bring it back to 60% (the level which is conventionally reckoned to be sustainable in the long term) by 2040 would require absolutely vast public spending cuts on a level we simply haven’t witnessed yet, despite the Chancellor’s best efforts.

Given the public protests which have accompanied some of the cuts that have been enacted already, it is worth entertaining the possibility that this level of austerity may simply be politically impossible. Although Britain has so far been spared the level of public protest – which has included general strikes – that has been witnessed in Greece during its recent economic travails, the British government has been scarred before by trying to cut more than the public was willing to tolerate.

Back in 1931, the National Government, which was trying to keep Britain in the Gold Standard while battling the Great Depression, announced a series of radical cuts in its annual budget which were designed to calm concerns in the markets about whether Britain could repay its debts. This included cutting pay for all public sector workers, including that of sailors, by between 10 and 25%. When news of this reached a group of sailors who’d just returned to the Scottish port of Invergordon after a tour of duty on the seas, 1,000 of them launched an open mutiny which lasted for two days before they were brought back under control. The shock of this reaction forced the British government to back down, and 10 days later it left the Gold Standard, to the shock of the financial world.

Here in the present, it seems that years of further cuts lie head, a policy which the politicians know can only be pursued for as long as the public tolerates it. It seems that the symbolically-important ring-fencing which surrounds certain categories of spending, including schools, health and pensioner benefits, will have to be gradually dismantled after the next general election.

Whether the government which is in power then has the will to go through with the full scale of the cuts which BIS thinks is required is anyone’s guess, of course. Given past government behaviour, it would be no surprise if it made every attempt to kick the can as far down the road as possible – and straight into the laps of future generations.