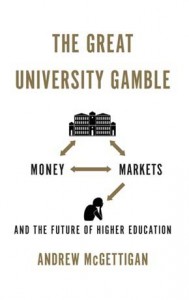 Dr Andrew McGettigan is a writer with a background in philosophy who has become one of the leading experts in the changes to higher education which have been brought in by the Coalition government since it first published its response to the Browne Review of higher education funding in 2010.

His new book, The Great University Gamble, which he describes in its conclusion as “a tour through the backrooms of higher education policy”, represents the most significant attempt anyone has made so far to analyse in painstaking detail the various impacts of the Coalition government’s vision for the higher education sector. Some of his findings, especially those in Part 4, which investigates the impacts of the post-2012 student funding arrangement for the public finances, develop ideas which he has previously advanced in a report he wrote for IF last year entitled False Accounting? Why Higher Education Reforms Don’t Add Up.

The book is divided into four Parts, each of which examines a different aspect of the Coalition’s policies towards higher education and their impacts. Part 1 lays out the basics of the system we have for student finance and how it has been altered by the post-2012 reforms –  the most prominent of which has been the almost complete removal of direct government funding for institutions through the block grant, and its replacement with higher tuition fees paid for by the individual student, which can now cost to £9,000 per year.

Part 2 explores the role of “marketisation” as the overriding logic behind the Coalition’s reforms, and how they have been designed to make it easier for new providers to enter the higher education sector, including those operating on a for-profit basis. Part 3 then examines how different forms of privatisation have influenced higher education institutions in recent years, not only in terms of funding but also with regard to their corporate structures (which increasingly resemble those of private companies) and how this has reduced the potential for universities to remain publicly accountable. Part 4 has already been summarised above.

The first is that the idea of creating a genuine free market in higher education provision – and he presents serious evidence to show how this has always been a key goal of Coalition policy towards universities – is impossible as long as there remains a cap on the number of overall places.

The Coalition has had to impose this cap in order to limit the up-front cost of lending tuition-fee and maintenance loans to students (estimated to be £10 billion in 2014/15). As the number of places is fixed, the only way to try to create a market artificially has been to institute a Byzantine system of competition between the different institutions for the various categories of places (divided into “AAB+”, “Margin” and “Core”, with different universities having varying allocations of each), which McGettigan skilfully manages to unpick.

Damningly, despite all the upheavals to higher education funding, McGettigan shows that the total number of places for 2012/13 entry actually fell by 10,000, meaning that none of the additional unmet demand for higher education has so far been met by these reforms.

The other theme which runs throughout the book are the secretive and shadowy mechanisms which have been used by the Coalition to implement its higher education reform agenda, which have minimised the opportunities for proper democratic accountability.

Briefly, there has still not been any primary legislation introduced by the Coalition which deals exclusively with higher education reform, seemingly because the government is keen to avoid the level of publicity and opportunities for parliamentary debate which this would create. Instead, reforms have been pushed through via the most discreet methods possible, including changes to the quangos that oversee higher education, such as Hefce (The Higher Education Funding Council for England), through amendments which have been subtly tacked onto largely unrelated bills (including the 2011 Education Act, which mainly dealt with secondary school reforms) and by scheduling important parliamentary votes to ensure they attract the minimum amount of debate or publicity.

Altogether, the changes which have been made to higher education by the Coalition since it came to power in 2010 produce a complex story which McGettigan tells with remarkable skill and attention to detail. It can only be hoped that this shadowy process – the results of which will not be seen in full for decades to come – receives a much higher degree of public scrutiny in the future. For any concerned member of the public who is interested in learning more, McGettigan has produced a first-rate guide.

Available from the publisher, £15

The author has produced a short video in which he provides an introduction to some of the issues raised by his book, which can be viewed here. He is also due to speak at a combined public lecture and book launch event being held at the University of Hertfordshire on Tuesday 4 June; please click here for details of how to attend.