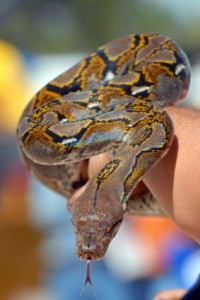 Every state has its own army of public-sector workers – teachers, policemen, firemen, tax-collectors and so on – who enable the state government to carry out of all of its functions. Similar to the situation in much of Europe, the vast majority of these workers belong to final salary pension schemes provided by the state, which are often more generous than the kind of occupational pensions which are available in the private sector.

In recent years, concern has mounted about how much money some states are having to spend on the promises they’ve made to former state employees, most notably in Illinois, which is often said to have the worst-funded pension scheme in America.

In response to the growing doubts that the state will be able to honour its pension commitments, Pat Quinn, the Democratic Governor of Illinois, has even gone so far as to launch a publicity campaign to try and draw attention to the issue, which included creating a mascot called “Squeezy the Pension Python”.

The campaign is centred on a YouTube video in which Mr Quinn spells out why the state is facing such dire problems over pension funding, before he unveils his mascot:

According to a recent article in The Economist, Illinois’s unfunded pension liabilities amount to $100 billion in today’s money, and this figure is increasing by $17 million every day. A report for the Illinois Commission on Government Forecasting and Accountability last November found that the pension scheme’s assets were only worth 39% of its liabilities, well beneath the threshold of 80% which is generally considered to be safe.

This matters because the state, and therefore the taxpayer, is liable to make up the difference. During the 2013 fiscal year, the state will pay $5.1 billion dollars into the state employees’ pension fund, an amount which is forecast to rise by another $1 billion the following year.

Coming out of a total state budget that only amounts to $30–$35 billion a year, cutbacks inevitably have to be found elsewhere to help plug this gap. The Illinois assistant budget director, Abdon Pallasch, is referred to in the Economist article explaining the grave impact this has already started to have on the state’s ability to deliver ordinary public services:

“The pension squeeze has already closed prisons and juvenile detention centres, and has reduced inspections by the State Department of Agriculture. Cuts have also been made in state aid to colleges and universities, student scholarships and pre-kindergarten places.”

Any relief in sight?

There are no easy solutions to the problems of pension underfunding. For years, states have been contributing less than they should have been to meet their pension obligations, while allowing the pension funds to assume they would get rates of return on their investments which turned out to be totally unrealistic. Meanwhile, public-sector workers have been living longer and longer, costing Illinois more money not just in pension contributions, but in higher healthcare costs as well, as these pension funds usually provide retired workers with healthcare coverage too.

Tax rises may not be enough to stem the problem, even if the politicians could sell them to voters. Joshua Rauh of Stanford University has produced a set of calculations which suggests that the Illinois pension system would need additional revenue equivalent to $1,907 dollars per year from each household in the state just to become fully-funded in 30 years’ time, and even that assumes they could get an annual return of 2% above inflation. Given the disdain among the general public for tax increases, saying this seems optimistic would be putting it mildly.

It seems likely there will also need to be adjustments on the other side of the equation to control costs, both now and in the future. These would amount to workers and pensioners taking a hit, such as through less generous inflation indexation or higher retirement ages, but obviously this would have political repercussions. The state government is hampered by a clause in the Illinois constitution which says that pension benefits cannot be diminished or impaired, so there will probably be a prolonged legal battle over what this clause means they can and can’t do in practice.

Public-sector pensions are becoming a highly sensitive issue in traditionally Democrat Illinois, which has a history of powerful trade unions (not to mention shady politicians – the previous two governors before the incumbent, George Ryan and Rod Blagojevich, were both stripped of office and imprisoned on corruption charges). Ratings agencies are starting to put the state legislature under pressure over its bond rating, which could deter businesses from moving to the state.

At least Mr Quinn’s publicity campaign does seem to have had some of its intended effect, leading to a spate of articles about the state’s looming pension crisis in both the local and national media. Most of the coverage has been deeply unflattering, an appraisal best summed-up by the following quote from an article in the Chicago Tribune:

“Today’s generation, which inherited a close-to-debt-free Illinois, is handing a phenomenal amount of pension and other obligations to today’s children and grandchildren. Here, kids, you get to pay for all we spent, borrowed and promised… So let’s all have fun with Squeezy.”

Unfortunately, the problems the state is having to grapple with are becoming increasing common in the developed world. Illinois isn’t the first – and it certainly won’t be the last –place which has to grapple with the fairest way to allocate resources between the generations as the population ages.