A member of the House of Lords has recently suggested that senior citizens could be made to “earn” part of their state pensions through performing community services. David Kingman asks if this would be a workable idea 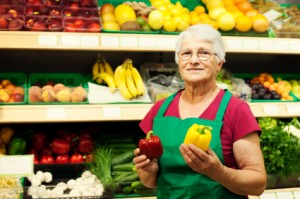 Lord Michael Bichard, a former civil servant turned crossbench peer, drew criticism this week for suggesting that older people could be compelled to “earn” some of their pension income through performing services to the community.

The peer – who sits on an important House of Lords committee which looks at the possible impacts of demographic change – argued that more “innovative” solutions need to be considered if Britain is to pay for the costs of its ageing population.

“Encourage older people not just to be a negative burden”

He suggested that it was unfair for the government not to expect retired people to do anything in return for their pensions while, at the same time, working-age benefit recipients are now often required to participate in controversial “workfare” schemes if they wish to retain their state support.

He provided the following quote to the BBC:

“We are now prepared to say to people who are not looking for work, if you don’t look for work you don’t get benefits, so if you are old and you are not contributing in some way or another maybe there is some penalty attached to that. Are we using all of the incentives at our disposal to encourage older people not just to be a negative burden on the state but actually be a positive part of society?”

His stance was supported by Professor James Sefton, a former advisor to the treasury, who argued when addressing the committee that young people are currently subsidising the older generation through substantial financial transfers from young to old (these include the state pension, healthcare funding and spending on universal old-age benefits, such as Winter Fuel Payments).

Professor Sefton claimed to be carrying out research at Imperial College London, alongside his colleague Dr David McCarthy, which shows that, as he put it:

As he explained, young people currently face financial pressures which didn’t exist for previous generations to the same extent, including higher house prices, high youth unemployment, rising public debt and increased tuition fees. As a result, they are having to rely more on private transfers of wealth, through families, than young people in other European countries.

By contrast, he argued, the older generation is still receiving generous state support, in the forms referred to above, which mostly comes from younger taxpayers.

Lord Bichard’s idea drew a furious response from pensioners’ groups, several of which made the argument that many older people already do a lot to help out other people, particularly family members.

Michelle Mitchell, director general of Age UK, emphasised the role already played by older people in providing voluntary services. She said that over a third of people aged 65 to 74 volunteer, and a high proportion of the over-75s did so as well. Almost a million elderly people act as free carers for their family and friends, and a third of working-age adults rely on grandparents to provide free childcare.

The leaders of Saga and the National Pensioners Convention also criticised the idea when speaking to the BBC.

Could this work? And would it be fair?

The biggest stumbling block to this idea is likely to be that the majority of older people will feel they have already done enough to pay for their pensions through making National Insurance contributions during their careers.

Of course, these have already been spent by the government, rather than being invested to pay for today’s pensions, so the idea that contributions are held in some kind of fund – as many people believe – is an illusion.

However, there is also a strong moral argument that people who pay NI contributions have a right to expect to receive a pension from the government because they feel they have been promised one, regardless of who actually pays for it. This is the generally accepted understanding of the contract behind the basic State Pension, and any changes to that will be very hard to sell politically.

The comparison Lord Bichard makes between his idea and workfare is interesting in this regard, though, because many working-age people who lose their jobs will have been paying NI contributions during the period when they were employed, and so could argue that they have already paid for the benefits which they receive as well.

The goal of workfare schemes is to encourage unemployed people to return to the labour market by attaching strings to their out-of-work benefits. Recent schemes in the UK have required benefit-claimants to spend a certain number of hours a week doing public service, either through tasks like picking up leaves on behalf of the council, or, controversially, providing free labour to major employers who participate in workfare schemes, including Asda, Boots, McDonald’s and Poundland.

Proponents claim that workfare discourages the work-shy from sponging off the state, while also equipping people with the skills that employers are looking for; but critics argue that it forces people to waste valuable time doing unproductive tasks which they could spend looking for proper jobs, while the companies which participate effectively have their wage bills subsidised by the government, creating economic distortions. There is little firm evidence that such schemes actually have an impact on reducing unemployment.

If retired people were put on similar schemes to the ones that exist already, there could be problems with them taking opportunities away from younger people, particularly in retail businesses, which would no-doubt be eager to gain free staff.

The protests from the old-age lobby may well also have hit upon a serious point; many retired people do give their time to valuable activities, and if they were no longer able to do them it could have unintended negative consequences (particularly within families who rely on childcare).

For these reasons, Lord Bichard’s idea would be difficult to implement, as well as probably being unpopular. As the population ages, it would be sensible to try to get older people to contribute more to the economy – but a better means of doing that would be to simply increase the retirement age, rather than the kind of halfway house which Lord Bichard has suggested.