Antony Mason looks at the laboured progress of the EU over the Common Fisheries Policy, which seems unable to address with sufficient urgency the threat to fish stocks and our fishing industry 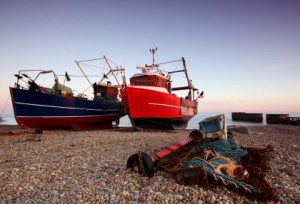 There is one area that can be seen as a weathercock, where the source of danger is so blindingly obvious that failure to avert disaster may point to humankind’s inability to save itself at all. Fishing.

The oceans could be an eternal source of food for generations to come, self-replenishing, sustainable, and – unlike farming – requiring minimal input to regenerate. Nature does that.

Yet some 72% of EU fish stocks are overfished. More offensive still, massive wastage – to the tune of 1.3 million tonnes of fish a year in the Northeast Atlantic – is incurred through the “discards” that fishing vessels are obliged to make when they have exceeded their quota of a given fish.

The writing on the wall

North American cod fisherman know the story: after a collapse of stocks on the Grand Banks of the North Atlantic, which devastated the livelihoods of thousands of fishermen, and the communities that depended on them, a total ban was imposed in 1994. Only now are there signs of recovery, as the WWF has reported, but stocks still remain at just 21% of what is held to be a sustainable level.

For another graphic image of what is happening to fish stocks, see the article called “The Ocean of Life – And the Sorrow Beneath the Sea” (Newsweek, 14 May 2012) by Callum Roberts, Professor of Marine Conservation at the University of York. It shows a series of pictures (see page 2 of the article) taken at Key West in Florida of the catch proudly displayed by fishermen in the 1950s, 1980s (in the print version only) and 2007, a sequence that moves from gargantuan to pathetic.

Roberts cites this as being a classic example of “shifting baseline syndrome”: a generation with diminished resources may be less outraged than it should because it has inherited a different status quo, or baseline, from which to assess its circumstances. It’s an intergenerational hazard.

The Common Fisheries Policy (CFP) is meant to address this issue in EU waters, and where EU vessels operate off foreign shores (usually under licence from developing countries), and reform was due this year.

The EU Council met last June in Luxembourg and, after a bruising round of discussion, came up with a set of proposals widely seen as a compromise – condemned by some as an opportunity missed, but commended by others as pragmatic.

A policy of imposing maximum sustainable yields (MSY) would be in place by 2015 “where possible” (i.e. where scientific information about stock levels of individual species is available), and by 2020 overall.

Dates were proposed for a ban on discards of mackerel and herring starting on 1 January 2014, while a phased ban on the discarding of cod, haddock, plaice and sole (whitefish) would be fully operational only by 1 January 2018.

Too little too late?

Many feel that the delays in implementation will be too long for “at-risk” stocks, particularly whitefish, which may be pushed beyond sustainability by the time the measures are introduced.

Green MEP Isabella Lövin, from Sweden, summed up the views of many disappointed analysts: “Fisheries ministers have demonstrated total short-sightedness with regards to the urgently needed reform of the EU’s Common Fisheries Policy… To address the precarious state of many fish stocks and the problems of overfishing, the EU Commission had proposed to set catch levels that would allow fish stocks to increase above the levels needed to ensure sustainability, or the ‘maximum sustainable yield’. Scandalously, the Council has decided to overturn this proposal, postponing any shift to sustainable catches and only ‘where possible’. In effect, this is prescribing the continuation of a fisheries industry based on overfishing and resulting unprofitability.”

Celebrity chef Hugh Fearnley-Whittingstall, driving force behind the Fish Fight campaign, was a little more emollient: “It’s right to describe today’s commitment by EU ministers to a discards ban as a ‘massive breakthrough’ … We know that changing EU law will be a marathon, not a sprint, and there’s still much more to do in the coming months to make sure the ministers deliver on these promises. We need to change provisional dates into a completely committed timetable. We need to persuade MEPs to improve on, and then ratify the decisions taken by the ministers. Only then can we ensure that we will have sustainable fish stocks, a viable fishing industry and a healthy marine environment for generations to come” (quoted among others in SeafoodSource.com).

Many had hoped to see a move away from “top-down”, overcentralised fisheries policy to one that is more sensitive to local conditions and better-attuned sustainable practice.

The discard problem arises because fishing vessels are permitted to continue fishing for other species after their quota in a given fish has been exceeded. Because they cannot legally land more than the quota, they discard the excess – chucking perfectly good, dead fish back into the sea.

But an experiment by the Marine Management Organisation (MMO) in the UK’s Channel has shown another way: allow a larger quota, but insist that fishing must cease when a quota of any particular species reached, and all the catch must be landed. On-board CCTV cameras can ensure that the rules are obeyed.

UK Fisheries Minister Richard Benyon endorsed the scheme: “We came forward with a practical solution of counting what they catch, not what they land.”

Meanwhile, there are numerous professional fishermen in the UK who operate small boats (under 10 metres) and fish in an environmentally sustainable manner.

The trouble is that EU quotas are skewed very much in favour of off-shore, large-scale fishing vessels which are far from environmentally friendly. Put it this way: 77% of the UK’s fishing fleet consists of small boats, representing 65% of employment in the UK fishing industry. Yet they receive just 4% of the quota – in many cases insufficient to make a living, driving out of business local fishing fleets that have been in operation for generations.

Lobby groups suggest that they deserve 20% of the quota, but such a generous realignment is strongly opposed by powerful, large-scale fishing interests.

The absurdity of this situation is made plain in the “Manifesto for Fair Fisheries” recently published by Greenpeace in conjunction with NUTFA (New Under Ten [metres] Fisherman’s Associations) and a host of other fishermen’s associations. The message can best be summed up in the phase “Give the right to fish to those who fish in the right way.”

Who could argue with that? If the EU fails to grasp the nettle on this issue, future generations deprived of the ocean’s extraordinary bounty will have every right to condemn their forebears as short-sighted, self-indulgent fools, who completely failed in their responsibilities of stewardship.

Meanwhile, in the face of the steady destruction of sustainable fish stocks a painting sprints to mind: James Ensor’s Skeletons Fighting over a Pickled Herring.