Billy Harding, a volunteer at IF and second year student at Exeter University, has been digging into the contract which new students will be signing up to for the loans – and doesn’t much like what he sees 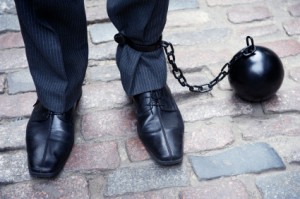 If you are, or intend to be, a student in higher education, and hope to receive a government loan, you will have to sign – or perhaps already have signed – a Student Loan Agreement outlining the terms on which it will be given to you. This agreement, which is a contract (see Student Loans – A guide to terms and conditions 2012/13), pins a particularly murky responsibility upon you:

“You must agree to repay your loan in line with the regulations that apply at the time the repayments are due and as they are amended. The regulations may be replaced by later regulations.”

This clause, in theory, grants licence to any future government to freely amend the regulations concerning loan repayment – such as increasing the rate of interest, lowering the income threshold at which repayment begins, extending the write-off period (currently 25 years, from 2012: 30) or even scrapping the write-off entirely. Antony Mason, in his recent IF blog, argues that no bank or business would be able to get away with this “unforgivably vague clause”, with its seemingly infinite potential for further amendment and manipulation.

What about the Consumer Credit Act?

This loan agreement is not covered by the Consumer Credit Act 2008. Although this is a piece of legislation intended to protect the rights and interests of debtors, the Student Loan Agreement is exempt on the grounds that it is a “low-interest” loan and “offered to a particular class of individuals and not offered to the public generally… Examples of such [exempt] agreements may include student loans, and loans by an employer to his employees” (clauses 3.7 and 3.8 of “Consumer credit – regulated and exempt agreements”, December 2008). Note, however, that student loans have in the past been protected: between 1990 and 1998 they were regulated under the Consumer Credit Act of 1974.

It may come as a surprise to find the student loans are classed as “low-interest”, especially as  the Education Act 2011 allows the level of interest to be set according to market rates. However the Consumer Credit bar for low interest is set at credit-card levels: an APR of less than 26.9%.

Dr Andrew McGettigan, in his paper for IF False Accounting? Why Higher Education Reforms Don’t Add Up, makes the point that this lack of statutory and legal protection can allow governments to easily manipulate the scheme, without having to adhere to ordinary legislative and democratic process. He recommends that tougher contractual clauses be put in place, to fix the terms of repayment at the time the loans are taken out. He has launched an e-petition to this end, which can be accessed here.

Whether under the protection of the Consumer Credit Act or not, students are now being classed as consumers by the government. In the context of fees rising to a cap of £9000, and the “marketisation” of higher education, the June 2011 government White Paper “Students at the heart of the system” outlines the ambition to “promote the interests of students, including as consumers”.

But it hardly seems to be in the spirit of loans for students to leave them so unprotected.

So, if you are a graduate, current/prospective student, or are simply concerned, you should give this issue further thought. If as well, like me, you agreed to these terms without fully understanding the conditions attached, it may well be wise to raise awareness of just what students seem to be getting themselves into.

By being burdened with long-term debts based on a flimsy contract, graduates risk becoming effectively “indentured” – and  simply because they have decided to take the path of higher education.

The shady clause which permits change to the terms of the loan could be considered symptomatic of the current government tendency to prioritise short-term easy money without due consideration of longer-term social implications.