Antony Mason sees much to commend in “Plan B for Youth”, launched by the think-tank Compass on 17 July 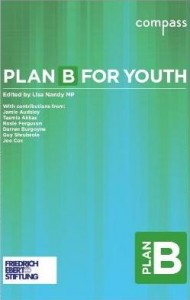 It is clear that young people in this country – indeed in Europe generally – are getting a raw deal in this recession. As the government battles with deficit reduction, youth unemployment (16–24 year olds) remains obstinately over 1 million, and policy makers seem bent on favouring the older electorate rather than youth: universal benefits such as the Winter Fuel Allowance are assured while the Education Maintenance Allowance is scrapped.

Everyone knows the corrosive effect of long-term youth unemployment, and the problems that can flare up among a generation that sees its future blocked or blighted. Are we helpless to do something about it?

The think-tank Compass thinks not, and calls for urgent and concerted action to turn the tide, as outlined in their recent report Plan B for Youth (downloadable here), edited by Lisa Nandy, MP for Wigan and Shadow Children’s Minister.

Plan B for Youth concisely analyses the difficulties facing Britain’s youth (16–24 year olds) today, but makes a robustly positive response. Something can, should and must be done about it. The report is driven by “the belief that an economic and political vision for young people and their present and future opportunities can, and should, be a national priority.”

It comes up with a series of proposals, most of them commendably practicable, if given the will and (not unreasonable) funding priorities. They include:

Plan B for Youth is one of a series of reports by Compass based on the notion that the Coalition government’s strategy of deficit reduction through austerity measures (the Plan A) is not working.

In the context of policies forBritain’s youth, the report says “Plan A is failing to deliver the bright future that this generation of 16-24 year olds deserves. It is time for Plan B.”

This is not to be confused (as Google does!) with the work of the hip-hop artist, writer and film-maker Plan B (aka Ben Drew), creator of the recent film Ill Manors, although they share much in terms of outlook, vision and the drive to make a change – as testified in his TEDxObserver presentation Plan B – Youth, Music and London. Also recommended!