Antony Mason, Guest Editor of this year’s Intergenerational Justice Review, gives details of its content, and how it all came together 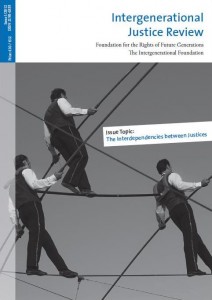 The Intergenerational Justice Review has been published by the Stuttgart-based think tank the Foundation for the Rights of Future Generations (FRFG) since 2002. For this year’s edition, the FRFG invited the Intergenerational Foundation to join its editorial team of James Wilhelm and Boris Kühn, and so I was delighted to be given the role of Guest Editor.

Founded in 1997, the FRFG has played a leading role in gathering and supporting research in intergenerational issues at the academic level — research that usually falls within the compass of university departments of law, politics and philosophy.

The Intergenerational Justice Review (IGJR) reflects this academic focus. Articles, submitted by senior academics and researchers in the field, are peer-reviewed and published only on the recommendation of two reviewers.

In their papers, the authors tackle the theoretical challenge of combining intra- and intergenerational justice, and seek to investigate how the interdependencies intersect in numerous case-specific contexts.

The four selected papers are as follows:

“Economic Analysis of Trade-offs between Justices” by Prof. Dr. Stefan Baumgärtner (professor of sustainability economics at the Leuphana University of Lüneburg) et al.

“Combining Intergenerational and International Justice” by Prof. Dr. Christoph Lumer (professor of moral philosophy at the University of Siena, Italy)

“Antonin Scalia’s Constitutional Textualism: the Problem of Justice to Posterity” by Prof. Dr. Bruce Auerbach (political theorist in the Department of Political Science at Albright College, Pennsylvania) and Michelle Reinhart

“Short-sightedness in Youth Welfare Provision: the Case of RSA in France” by Juliana Bidadanure (PhD candidate in political philosophy at the University of York)

Dr. Daniel Butt (lecturer in political theory at the University of  Bristol)

Dr. Bronwyn Hayward (senior lecturer at the School of Political and Social Sciences at the University of Canterbury, New Zealand)

Prof. Dr. Michael Wallack (retired faculty member of the Department of Political Science of the Memorial University of Newfoundland, Canada)

There are also book reviews of:

Climate Change Justice (2010) by Eric A. Posner and David Weisbach

In line with the aim of both FRFG and IF to disseminate intergenerational research as widely as possible, a free online version of the IGJR 2012 is accessible on our website: please click on this link.

A hard copy of the journal (ISSN 2190-6335) can be ordered by emailing [email protected]. The cover price is £10, but IF will give copies away for free to the first 50 researchers and academics who apply. First come, first served!