David Kingman reviews Regeneration, the latest book in the Radical Futures series, sponsored by IF 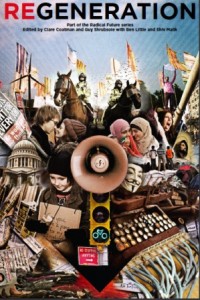 Regeneration, part of the Radical Future series, edited by Clare Coatman and Guy Shrubsole with a foreword by IF co-founder Shiv Malik

Regeneration was launched on 23 February at Foyles bookshop in Soho with an event chaired by BBC economist Evan Davis. He led a panel debate which included IF co-founder Shiv Malik and several of the book’s contributors answering questions from the audience. A video of the debate can be viewed on the IF website here. We also recorded interviews with several of the book’s other contributors, including co-editors Clare Coatman and Guy Shrubsole, which are available from Intergenerational TV.

Regeneration itself is a collection of twenty-three essays written by a diverse range of contributors on different aspects of intergenerational justice. They provide a broad spectrum of perspectives, from Ben Little’s call for a new economics to Ray Filar’s argument that we need the insights offered by “queer feminism” to advance our concept of gender relations, which all seek to add something new to current debates about our economic and political future.

Two of the contributions were written by prominent Intergenerational Foundation supporters. Kirsty Schneeberger MBE is the founder of Think2050, a campaign group which encourages leaders to think about the future by imagining where they will be in 2050, and what kind of world they would like to be living in. She wrote the final article in the book, titled “Those yet to be born: representing the rights of future generations”, in which she robustly makes the case for why the British government should establish an ombudsman for future generations, following the example set by Hungary in 2008.

Since his election as Hungary’s first Parliamentary Commissioner for Future Generations four years ago,  Sándor Fülöp has received over four hundred petitions from the general public, mostly relating to matters of sustainable development, seventy of which he has forwarded to the Hungarian Parliament for investigation. Under the Hungarian Constitution all citizens of Hungary have a right to a clean and healthy environment, and the fact that it is a constitutional right means that its legal scope extends to cover future citizens as well. The Commissioner has been given responsibility for representing their interests when any government actions which might have an impact on this right are being debated, and Kirsty Schneeberger eloquently makes the case that the future citizens of Britain should be represented to a similar degree as well.

“A contract between generations: pensions and saving” is the contribution written by Craig Berry, who is also the author of The Rise of Gerontocracy? Addressing the intergenerational democratic deficit, IF’s recent report on how older generations have a disproportionate impact under the UK electoral system.

He provides a fascinating overview of how the pensions landscape has changed during the last thirty years, with the decline of more generous defined-benefit pension schemes and the rise of riskier, less-egalitarian individual private pensions, which will leave many of today’s young workers with very little when they retire. He calls for a radical shift in pensions policy towards greater “financial citizenship”, in which people of all ages will be encouraged to save by feeling that they have more say over what happens to their money and who controls it.

This is just one of the policy recommendations from this excellent book which, if they were to become law, would give young people in Britain today the prospect of a much fairer, more prosperous future.

Regeneration is available to download for free from Lawrence & Wishart (or £12.99 for a printed copy):