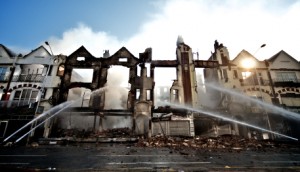 Melissa Jane Knight reflects on the experience and causes of the riots that shook London and many other cities of England in August 2011, and makes a powerful appeal for action at ground level.

I should have been watching the riots with a smile, rubbing my hands like a good capitalist. Despite recession cuts to key services such as libraries and parks, this secures my line of employment as a specialist youth worker with excluded teenagers. But of course I didn’t. Instead I watched in horror as fires blazed, burning the livelihoods of thousands of workers – their homes and their businesses.

Up, too, burnt the hard work of council staff, probation officers, teachers and people like me.

Instead, I witnessed joined-up working on a scale that defied local authority boundaries, outsmarting a frustrated and tired police force.

As Croydon blazed, Ken Livingstone told the BBC that these are a generation of young people with no or few job prospects, and a future that promised to leave them worse off than their parents’ generation. But the old folk are screaming at me right now, “We had nothing in our day!”

Exactly. For them, there was nothing of the materialism that we witness in our society. These are not the times of Sunday Best. These are times where wardrobes are full of clothes, many with top high-street labels attached, unworn before the fashion trend switches from floral to “this season’s must-have large print”. British weather may be volatile but unlike Primark, a season still lasts around three months.

Propping up this unprecedented materialism are the adverts for it, and I don’t mean the seconds of flashy super slender white bodies painted gold, rubbed up against oversized bottles of perfume. I mean programmes like My Super Sweet 16 and Cribs, which show the fantastic wealth of over-consuming youth. Then there are the indirect images in teen shows where all the actors, if American, drive convertible cars to and from school, and if British, push every boundary going, from sex acts to drug use, all in the latest choreographed outfits from the high street.

But I didn’t run down the road and it wasn’t because a dishwasher I need is too large and too heavy, or because I want to own a digital projector. No, it is because I am a stakeholder. I need this community and feel this community needs me.

So much for the Big Society

David Cameron always had a huge job on his hands to try and convince a groomed nation of individualist capitalist consumers that the Big Society is where the party’s at. Running services as volunteers ain’t going anywhere when the real work requires more than time share at the local library.

Every single youth you witnessed stealing trainers and clothes is a failure by all of us to engage them. The chasm between young and old is unforgivable. As I wrote in my dissertation on ASBOs, when upping punitive punishment was seen, as usual, to be the answer: “Adolescents are not hooded monsters who naturally seek to intimidate or harass. They are young people with energy and time but little experience. Adults are people with lots of experience, but little energy and time. Somewhere a swap needs to take place.”

The lure of easy pickings

What we all witnessed during the riots was the ability of a hardcore of ringleaders to whip up groups of youths into frenzy. Just as whispers fly around to come see the fight happening in the back playground after school, thousands of opportunists heard the Pied Piper’s call to grab what you can.

Why? Some of the  answers will come from the disengaged young people who are from those same estates and income scale, but who chose to stay home. Whose parents watched them like hawks to see if there was even the slightest possibility of their involvement, knowing the sorts of kids that go out and steal goods for fun. Why say no, when the sheer scale of those saying yes means you won’t get caught? And to those abstaining young people without loved ones, I take my hat off to you.

The riots and looting spelt a new era of youth uprising and rebellion. There is no doubt about that. They started a war, not with local residents, though my friend’s car was firebombed in London Fields. They started a war with police. In my role as a youth worker, there is not one single black male teenager I have worked with who says he has a good relationship with the police. Even those who are prepared to accept that the police are there for the benefit of society, and that this is a good thing, still complain of stop and search, wrongful arrest, intimidation.

The media covered the riots as being mainly carried out by “ethnic minorities”.  Though ethnicity may implicate one’s life chances, it doesn’t determine criminal activity.  To make that assumption only widens the chasm between groups. Britain might as well be saying they’re not British. But they are. Some are third and fourth generation born British. This is certainly a British problem.

In an era of positive discrimination, we subject thousands of British youth to continually tick “black”, “white”, “mixed-race”. So what if your skin is black? It’s skin. Why not eye colour? Hair colour? With every X in the box, the subjectivity of the youth is that they are in a different box, set in a different column, set in a different space on the page from their peers.

Then drop down from the statutory level and look at how much those forms have positively affected the private-sector workplace. Have you ever stood outside Bank or Liverpool Street station in the City of London to play “spot the black person”? You should: it’s a real eye-opener. And yet, as the suits all marched over London Bridge post-riots, the last thing on many minds was “I’m going to get in touch with the male mentoring programme.” Something needs to change.

So what can we do?  While the flames have subsided the embers are still hot and I want to offer you a new approach to cool them.

Not every young person you saw on the news is a criminal. Most were opportunists. There were a hardcore collective of criminals who hijacked a peaceful protest and showed the world they can mobilise a malleable, bored mass to wreak havoc.

Parents and loved ones at home are key in showing their children that stealing is wrong. As responsible adults, we need to make a stand and make any child hand stolen goods back. During the riots I saw teenagers running up my street with stolen goods. They’ll have taken those goods home. It is up to their loved ones to stop them enjoying the fruits of their loots. Look under their bed. In their wardrobe.  Ask them, “How did you pay for this?” Without a satisfactory answer, be bold parents: confiscate and hand the goods in.

These young people won’t care what the police think. They won’t care they are called criminals or thugs. They feel it already. They wear all their designer labels proudly these days. But if someone at home tells them Martin Luther King, Gandhi, Rosa Parks, Mother Theresa never stole Nike trainers from JD Sports to protest against injustice, they may listen.

Someone should tell them that they are being exploited by people who only pervert their problems further. Who talk of a conspiratorial secret society or “illuminate”  of impenetrable Britain where poverty will only get worse. Then we must learn from our elders, who went through rationing, who wore their Sunday Best, week in and week out.

The craziness of riot-induced hysteria needs the healing power of loved ones to teach values about being human, that new trainers may band-aid today’s lack of status, but will fade as soon as Nike brings out its latest £105 pair of Bangladeshi-women-working-for-£17-a-month shoes. Inner confidence and an outer vision.

To our leaders (David and Boris): you won’t win the battle unless you offer these young people some of what you give your own children. They’re smart.

They know your inherited wealth isn’t earned by you. That most wealthy people sit on money that someone, somewhere once got from exploiting others. That landed estates were once commons. That our chancellor will inherit £4 million, £1.4 of which is tax-dodged. That their employed uncle is tired, over-worked, hardly sees his kids, or makes enough money to buy his own flat. Unlike Rosa Parks, they don’t want to sit anywhere on the bus: they want their own car, and we are giving them not even the slightest chance to realise this. Instead you scrap EMA and Connexions.

Viewing the ring leaders as mindless thugs is a huge mistake. American Rap has morphed into a new UK underground scene. Lyrics are “conscious”, set against the same enticing beats, now telling the young and the poor that bankers, politicians and police are keeping them down. That no matter what they do, the big house and car will remain locked away from them behind the stolen flat-screen as they watch MTV’s Cribs. That unless they stand up and take what they want, no one will be arriving to help lend a hand. They have seen that for fifteen years watching their mother struggle to feed and clothe them. And as families are pushed to the limit to pay energy bills, the moral fabric soon weathers when their teenage son or daughter chucks in a quick fifty made from last night’s cash and carry.

The lady screaming in Hackney on the riot night said it and said it right. “Allow out [stop] burning people’s shops that they worked hard to start their business. You understand? She’s working hard to make her business work and then you lot wanna go burn it up. For what? Just to say you’re warring and you’re bad man? …Get it real black people. Get real. If we’re fighting for a cause then let’s fight for a f****** cause. You lot piss me the f*** off. I’m ashamed to be an ethnic person, ’cause we not all gathering together fighting for a cause, we running down Footlocker teefing shoes. Dirty teefs ya know! Cha!”

Years ago Mr Cameron announced the solution and was laughed at but he was right to say “Hug a Hoodie”. As I said before, the answers lie in the kids that didn’t rise to the Pied Piper’s call. The ones safely tucked into the arms of a loved one, and a loved one can be anyone. Where parents are on alcohol and drugs, out prostituting themselves, in prison or living elsewhere; those that are absent or indeed, in shops looting, others are needed to take their place.

A few months back, when we saw my boyfriend’s bike being stolen by two hooded monsters, we ran out to get it back. I saw the youth in their faces and shouted “Stop! I’m a youth worker!” After little reasoning he returned the bike.

My boyfriend walked back to re-chain it to our friend’s bike, but I remained. I couldn’t just let them go without asking why? He told me “What man, I gave the bike back?” I replied, “I don’t care about the bike. It’s just a bike. I care about you. What about you? What are you good at?” He looked at me, his smaller friend silent the whole time. “What are you good at?” I yelled. “Nothing”.

Tears pricked my eyes. Familiar tears. The ones I leave the classroom sometimes to have in the toilet. “Don’t say that. Don’t say nothing.” He had no words for me. “You’re better than this. You’re better than being a thief.” He was silent. What he didn’t do was run away, or get angry. He didn’t pull out whatever it was he cut the bike lock with and he didn’t jab it in me. He simply looked at me, without any answers.